iOS 5 to be unveiled later today, here's our rumor roundup

We are about ten hours away from the start of the WWDC ’11 where Apple will demonstrate the new iOS 5. Now the last few weeks have been quite busy with all sorts of rumors of what’s going to be changed or added to this next version. So we’ve compiled a little list of things that we have heard so far and are sure would make it to the final version.

This one’s a no brainer. From what we’ve heard about this service so far, we know it was designed specifically for Apple’s mobile products, which means you can expect tight integration of iCloud with iOS 5.

For now we know that it will allow you to upload your music to the cloud so you can stream it over the internet any time you want. But it could very well move beyond that, as you can figure out from the name itself. The name doesn’t just hint at music service the way, say, iTunes does. We can expect a lot more from iCloud, like the ability to upload/backup other kinds of data such as movies, contacts, bookmarks, game saves, application settings, etc. to the cloud and then transfer it to another device or restore it to the same device later. Perhaps, finally we wouldn’t have to connect the iOS devices to a PC or Mac anymore so that we may start using them. It could all be done over-the-air. 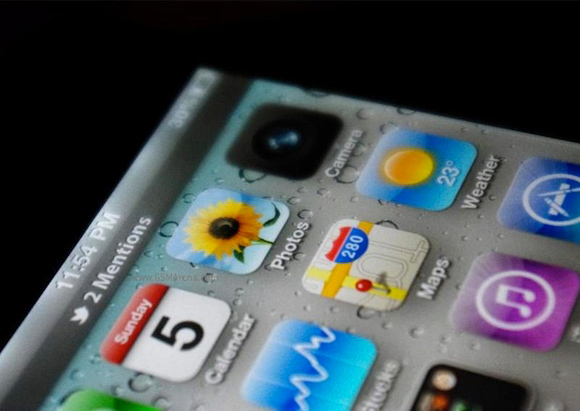 What you see above is something that was uncovered by Techcrunch just a few hours ago. Here you can see what we hope is the new iOS 5 screen. Notable changes include a new top bar, which has doubled up in size, as it usually does when it wants to get your attention, and displaying notifications, new tweets in this case. We assume when you tap the top bar it will take you to the app responsible for the notifications and if the notifications are from multiple apps it will show some kind of list.

Of course, the above image might just be a fake and someone could be playing with our emotions here, knowing how badly we want a new notification system in iOS. In which case that person can go to hell.

Ah, widgets. Android has them. WebOS has them. Symbian has them. Windows Phone 7 sort of has them. iOS was the only major OS that did not have them so far. But if the rumor mills are to be believed, Apple might just be looking at implementing them in iOS 5.

We have absolutely no idea how they will work though. In fact after looking at the above screenshot we are even doubting if at all it will be there in the OS. The current iOS homescreen is designed in a way that places application icons at the forefront, instead of in a separate list, unlike the aforementioned platforms. Implementing widgets would probably involve reworking of this entire system. And if the above screenshot is true, Apple hasn’t done that in iOS 5.

Of course, it could be done differently. The app icons themselves may show information. Currently only the Calendar icon changes according to current date; every other icon is static. Perhaps Apple will implement a feature that will let developers animate their icons to show information. Like the weather app showing the actual temperature, for a change. The iPod icon can show the album art of the currently playing track. Photos app could show the last taken shot. Clock app could show the time you set for the alarm. Maps could show your current location. And with the high resolution Retina display on the new iPhone and iPod touch, developers also have plenty of pixels to play around with.

The current multitasking method on iOS was welcomed by its users because any kind of multitasking is better than no multitasking. However, when seen on its own, it isn’t particularly great and nowhere near as good as it is on Symbian^3, WebOS or even Android. We are not talking about the way it works, i.e., by pausing apps instead of actually running them in the background, but more about the way it looks. Having a row of icons below and then scrolling through them four at a time wasn’t very convenient.

You may remember the video that was leaked that showed a white iPhone 4 with a very different kind of multitasking. It looked and worked similar to the way windows do in Safari on the iPad, with the last nine apps showing their windows in a grid. You could also see the Spotlight window now part of this screen instead of a different homescreen altogether. We do hope this is the new multitasking system as in our opinion it beats the current system hands down. We just wonder what happened to the audio playback controls along with the UI rotation lock that are present in current iOS as they are not shown in in that video.

Another thing that the rumor milled produced was new of Twitter integration in iOS. And we are not just talking about a Twitter app built-in but system-level integration, which would allow you to, say, go to Pictures app and share a picture there on Twitter without the need for any application. As you can see from the notifications screen above, the phone also notifies you about new tweets but we are guessing any app with access to the notification API would be able to do that.

Next week will be a huge week for those of us who have lived on Twitter for last few years. Apple is building Twitter in deeply into iOS5.less than a minute ago via web

Now some may be wondering why they chose the relatively new Twitter over the clearly more popular Facebook but it’s not really that difficult to guess. Twitter has always been looked at as the cooler alternative to Facebook; anyone who’s been long enough on Twitter will tell you that. Apple would certainly think so too and we all know how much Apple likes to maintain their image as the cool brand. Also, everyone else is merging Facebook in their phones, from Android OEMs to Microsoft in Windows Phone 7. Apple would definitely like to be different from the crowd while not wanting to miss out on the social networking action. Hence, Twitter.

A feature discovered in iTunes by a Mac Rumors reader, iTunes application update was hinting at an option that currently does not exist in the current iOS, but will allow apps on the device to automatically update themselves over-the-air as and when a new version is available. Currently, the App Store lets you know if there are updates available but you would have to download them manually.

These are some of the things that we are sure about. We'll find out soon enough though how many of these are actually present in the real iOS 5. And you can be sure we'll bring you the complete lowdown when iOS 5 is officially released.

no flash get a different phone get over it, besides flash for what

the league of extraordinary OS: - iOS5, Android, Symbian, Windows 7 We just need to be satisfied on what sort of handset we are using,to give satisfaction..to make us smile while playing games, talking to our love ones, exploring via intern...

But what is this? developers tools: Customize UI