iPad Air 2 and iPad Mini 3 get confirmed by Apple

Just as Google was busy announcing its new Nexus family, Apple managed to confirm the names of the two new tablets that it will introduce at its special event tomorrow.

They will be the iPad Air 2 and iPad Mini 3, the latter being the successor to the iPad Mini with Retina Display from last year and thankfully returning to a more concise naming scheme. 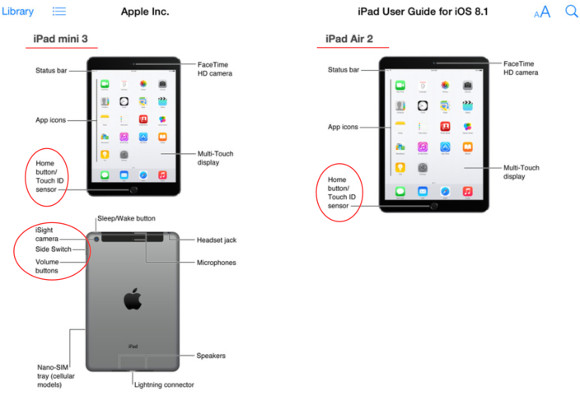 The names surfaced on iBooks via screenshots in the iOS 8.1 user guide for iPads. The screenshots have since been pulled, as you'd expect. They also confirm that the design of the new tablets will be mostly unchanged compared to their predecessors.

That said, both the iPad Air 2 and the iPad Mini 3 will sport Touch ID fingerprint sensors in their Home buttons, as has been leaked extensively until now. The iPad Air 2 will also get a new Burst Mode for the camera, a feature first introduced on the iPhone 5S from last year.

Since Apple's getting ready to publish the user guide for iOS 8.1, we assume this version of the OS will be released tomorrow alongside the new tablets. And it should support Apple Pay.

A new A8X chipset has been recently rumored to feature in at least one of the new iPads, along with a gold color option and improved camera performance.

It would be nice if the iPad Mini 3 gets the same RAM as the Air 2. Been holding back on buying the Mini 2 for the new one. Hope the differences are significant.

surely wont. not a big upgrade from our iPad mini 2 yah know.. i wont waste my money because it has a touchID and pinch faster processor than mine.

too bad they dont understand that~