iPhone 4 is the most reliable yet breakable smartphone out there

SquareTrade, the largest independent warranty provider, rated some of the most popular smartphones out there by their reliability and as it turns out, Apple's iPhone 4 suffers from the least non-accident malfunctions compared to the competition. Interestingly, it is also the easiest device to break.

According to a recent SquareTrade study, currently, the iPhone 4 is the most reliable phone (with only 2.1% projected to end up affected by a non-accident malfunction in the first 12 months). However, the competition, a bunch of Android devices made by Motorola and HTC, is not far behind (with only 2.3% and 3.7%, respectively). The iPhone 3GS reaches 2.3%. 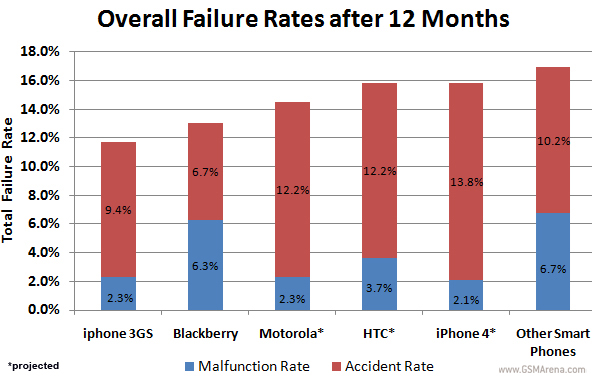 As for the phone with highest accidental damage rates, it is again the Apple iPhone 4. A projected 13.8 percent of the iPhone 4 devices suffer from some accident damage, while only 9.4% of the iPhone 3GS owners report accidents. Of course, the reason is that both the front and the back of the iPhone 4 are made of glass. And glass is breakable.

The most durable smartphones are the Blackberry, with only 6.7%, while the phones made by Motorola and HTC reached 12.2%.

An excellent opportunity my site for you. difference between lcd and led tvs

Jealousy is rather an ugly quality... If non iPhone users are happy without one don't try and persuade yourself you don't actually want one by putting down others who do have one

putting my iphone 4 onto the bed then coincidently shift my blanket then it drop from 1 foot high & the back screen just crack. So lousy material yet so expensive. told myself this is the first & last apple product i getting for.