So, the new camera module with a higher-res sensor, that's more sensitive to light and the improved optics let more light in. This should hopefully result in improved overall performance both in good and low lighting conditions, despite the increase in megapixels.

We'll do a more thorough check up of the camera in the review and we'll be doing an in-depth shootout in a separate article. For now, we'll pit the iPhone 4S against the old iPhone 4 to see if it's a worthy upgrade.

And a quick comparison of how both do when the lighting conditions aren’t favorable. Thanks to the bigger aperture, the iPhone 4S uses a lower ISO in the dark and its photos have considerably less noise.

For a quick discussion of the difference in the cameras, we've prepared these crops to highlight our points. They are cropped from photos taken with both the iPhone 4 and the 4S, with the middle section showing what an iPhone 4 photo looks when it's scaled to 8MP. 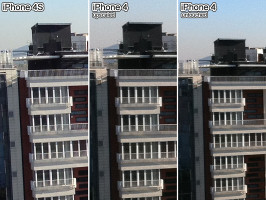 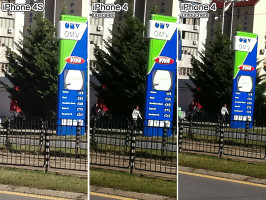 Have a look at the crops first, we don't want to bias you. Here's what we think - there's less noise in iPhone 4S photos, despite the increased resolution (usually more resolution means more noise too).

You gain a great deal of more detail with the 4S and its dynamic range is wider, so the objects in the shadow come out looking much better. Also, the iPhone 4 seems to exaggerate colors, where the 4S is much more accurate.

Video capture: from 720p to FullHD

The iPhone 4S also goes for FullHD video capture, leaving the iPhone 4 behind in 720p land. The difference between 1080p and 720p is nearly double the pixels - we have some crops from still frames taken out of videos to demonstrate that. Crops from video frames of iPhone 4S and iPhone 4 videos

Again, study the crops first. See it? Where the iPhone 4 completely lost all details in the bright area, the 4S preserved some, while the exposures look the same. That comes to show the increased dynamic range of the iPhone 4S camera.

Take a look at the middle crop, which is from an iPhone 4 video upscaled to FullHD (which is what will inevitably happen when you watch them on a FullHD TV). The foliage is completely smudged, while you can make out leaves in the iPhone 4S video and the bars of the fence are nice and crisp.

We shot a video with both phones simultaneously and put the result side by side. There's a little zoom window that shows details in the flags too.

One thing we should mention here is just how fast the iPhone 4S camera is - startup times and shot-to-shot times are noticably shorter than on the iPhone 4. The iPhone 4S is one of the quickest shooters around, which will encourage people to take more photos instead of worrying if they'll miss the moment while the camera prepares for the next photo.

Another thing we appreciated was the AF/AE lock - basically, once the phone finds the appropriate focus and exposition settings, they are locked for the entire duration of the video. It's an iOS 5 thing, however, and not an iPhone 4S exclusive.

That's not all - the faster processor in the iPhone 4S has allowed Apple to enable real-time stabilization. We did a quick test of the video stabilization - check out the side-by-side video:.

The two videos were shot with an iPhone 4 and a 4S, both fixed to the same stand held in the hand, so each gets shaken equally. The stabilization does an impressive job, considering it's in real time. Note that it may introduce some geometric distortion though.

This way if you pan between brighter and darker areas or an object fills a lot of the frame and then moves out, there would be no sudden changes in focus and exposition (which can be really annoying in some videos).