In case anyone has doubted the success of the iPhone 4S, we have some fresh numbers for you. Apple's latest smartphone has scored more than 200,000 preorders for AT&T in its first 12 hours of availability. 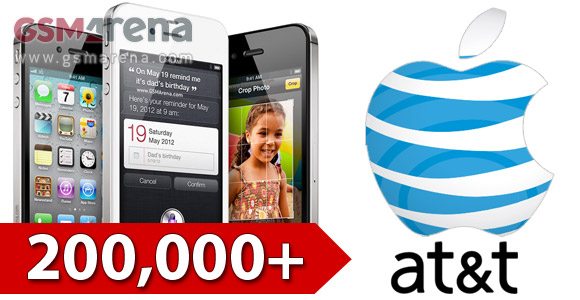 This stunning number makes the device the most successful debut yet for AT&T. It must be noted that Sprint Wireless and Verizon are yet to report preorder numbers for Apple's latest smartphone, so we can reasonably expect to see a number which is well above 200,000 for the device overall.

Despite keeping the design of its predecessor, the Apple iPhone 4S has received a serious upgrade of its internals, including a dual-core A5 CPU and a capable 8MP camera unit. Apple's voice-operated personal assistant, called Siri, is also among the major novelties in the device.

So it looks like Apple has done it again, folks. We will keep you in the loop on the subject as it develops. In the meantime, tell us what you make of the high demand for the iPhone 4S in the comments section below.

my dear please advice apple to never make a iphone more than 3.5 inch screen in future also and also ask them to reduce size of ipad into 3.4 inch

nice, but can it do this? http://www.youtube.com/watch?v=wi9k3eN8FAo I mean i'm musician and lot of people here clearly trying to say i should buy android phone, i have no idea what i do with it, because it never going to be as good as iPhone f...