Courtesy of Apple.Club.Tw we gain a new glimpse of Apple's upcoming lineup of flagship devices - namely the iPad Air 2, iPad mini with Retina 2 and, naturally, the iPhone 6.

The image doesn't have too much information attached to it although we can take it as the first sighting of an iPad mini with Retina 2 with a Touch ID fingerprint-scanning home button. Just last week we saw a dummy of the iPad Air 2 with a Touch ID home button so it's not that surprising though. 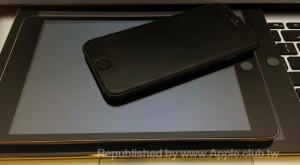 Apple is expected to expand the Touch ID capabilities from the iPhone 5s to its iPad Air and iPad mini 2 but it failed to do so. Now it's more than certain that the company will unleash the Touch ID to the next wave of iPads along with proper support in iOS 8.

What!! Again new leak! What are this leak trying to proof that apple will release iphone tommoro ha ha.

iPhones and other flagship phones cost nearly as much, so not quite true what you're saying. Apple only does not have low end phones, so yes, they do not have cheap phones.

Nokia and BB were way ahead when apple launched the first iPhone. FYI, earlier iPhones didn't even have Bluetooth which Nokia used to provide with Symbian S40 feature phones. Even if you see today, iPad Air WiFi only version doesn't have a GPS re...