Samsung found a niche where it doesn't overlap with Apple - phablets - and launched the very successful Galaxy Note line, now in its fourth generation. There's a Note-branded series of tablets. With the Galaxy Note 4 Samsung is taking cautious steps towards a premium build, not just a boatload of features. 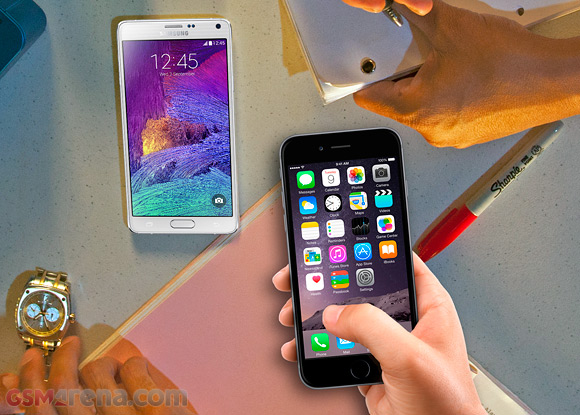 Apple, for once not in its usual pioneering role, joins the phablet market at its busiest and most productive time. With "premium" duly taken care of, Apple's challenge was to make the iPhone 6 Plus enticing enough to not get lost between the already bigger iPhone 6 and the iPad mini.

Cupertino introduces change very gradually to its star product, but things that worked for the iPhone 5 don't necessarily work for the iPhone 6 Plus. The bezels were okay on a 4" device, but they make the 5.5" phablet bigger than it needs to be. And the 8MP/1080p camera is showing its age, despite add-ons like OIS and phase-detection autofocus.

iOS 8 brought in new features to reach parity with Android in places where it was outdated, but Apple's only feature to make the big screen more useful was a split-screen mode for apps like we've seen on iPads. That won't bother iPad users who get the same treatment, but people looking to switch away from Android will definitely miss some features. That said, the new Apple chipset is as good as it gets on handheld.

Samsung has taken user's desire for a premium experience to heart and the Galaxy Note 4 in-hand feel matches its price tag. The screen was always a highlight for Galaxy flagships and the QHD Super AMOLED is great both indoors and outdoors. With thinner bezels the Note 4 fits more screen real estate in the same footprint too.

The TouchWiz software package fits every form of multitasking and comes with great multimedia apps out of the box. The Snapdragon 805 chipset could have done with some more GPU oomph to handle the extra pixels, but the Galaxy Note 4's battery life beats the iPhone hands down.

The camera shootout proved more interesting than we expected. In stills, Samsung easily comes out on top in broad daylight, but in the dark the iPhone 6 Plus was better. In video, it was a tough decision too - it's hard to argue with Galaxy Note 4's 2160p skills but Apple's stabilization and 240fps mode cannot be easily overlooked.

In the end, both devices open the doors for people looking to jump from one platform to the other. The iPhone 6 Plus brings beefier specs and a more customizable iOS 8 to draw in Android power users. The Galaxy Note 4 brings a premium exterior to match the advanced interior and might tempt quality-conscious iPhone users looking for more features and freedom.

The net result of such platform jumping is hard to predict but we hope we made your choice easier. Where the Apple iPhone 6 Plus and the Samsung Galaxy Note 4 overlap there's a clear winner more often than not. It's all up to you now to pick the wins you care about.