Before we dive into image quality, we'd like to quickly list camera features for both devices. Both manufacturers claim Optical Image Stabilization, but Apple also boasts phase-detection autofocus.

Apple does 1080p@60fps but goes up to 240fps at 720p for the best slow-motion mode yet. The iPhone 6 Plus also has a dual-LED flash to rely on in the dark. Both devices offer HDR modes for stills and videos, but the Apple phablet has that option in panoramas too.

There's not much for value-added features though - AE/AF lock, geotagging and face detection are about it.

True to self, Samsung loaded plenty of features. The Selective focus (which has become trendy recently) lets you change the focus point after taking the photo, Virtual Tour is an upgrade over regular panoramas (it lets you walk around as you shoot), Dual Camera combines photos taken with both front and back cameras simultaneously, while Rear-cam selfie automatically snaps a photo when your face is aligned just right.

The feature-rich camera of the Galaxy Note 4

The front-facing camera on the Galaxy Note 4 is good enough for selfies, it's a 3.7MP shooter that covers the QHD screen pixel for pixel. A slider controls automatic beautification. Better yet, you can download new camera modes.

Samsung has provided focus/exposure lock too, as well as geotagging and face detection. We already saw how the gallery app can sort photos based on people's faces.

The Samsung Galaxy Note 4 camera has a slightly wider Field of View (FoV), though the iPhone 6 Plus's 4:3 camera captures more of the scene vertically. Keep in mind here that a Note 4 camera sample measures 5,312px horizontally, while a 6 Plus shot is 3,264px and it has to draw just about the same detail.

The Galaxy Note 4 camera has double the total number of pixels and its native aspect ratio fits better on widescreen displays (like its own display and HDTVs). The higher resolution is easy to see in the level of captured detail - the STOP sign is clearly legible in the Galaxy Note 4 photo, the foliage looks better, the fire escape and roof tiles on the second row are sharper too.

This crop also makes it easier to compare color rendering - the iPhone 6 Plus has a yellow tint, while the Samsung has a slight blue overcast. 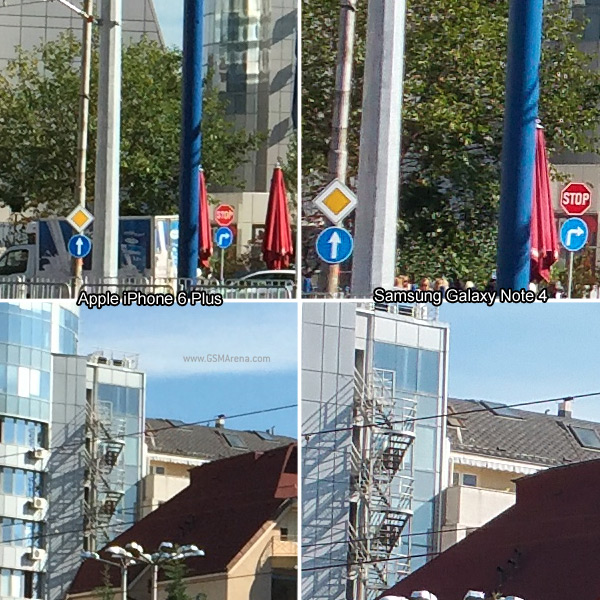 Both cameras keep noise in control with comparable success. Through pixel peeping we noticed the Samsung leaves some traces of over-sharpening but nothing major.

The Galaxy Note 4 also seems to handle shadows a bit better, but we'll get back t than in the HDR section.

Apple iPhone 6 Plus vs. Samsung Galaxy Note 4 in our Photo Quality Comparison tool

The Apple iPhone 6 Plus takes good-looking photos, especially considering the camera has changed little since the iPhone 5. Still, it loses on the most important factor (resolved detail) and offers no tangible advantage in other aspects.

Dynamic range is another important quality of a good photo. The Apple iPhone 6 Plus photos have more noise in the shadows, while the Galaxy Note 4 manages to hide most of it while offering slightly better level of detail. It also tends to resolve brighter areas better - the sunlit roof of the mall features a rectangular grid, which is visible in the Note 4 photo and washed out in the iPhone shot.

This is a very difficult scene, heavily backlit and with dark, shadowy areas - a perfect opportunity to test the HDR modes of both devices.

The Galaxy Note 4 mode manages to bring out extra detail in the shadows (the Bistro sign is more legible) though the brightly lit areas become more washed out. The iPhone 6 Plus HDR option also improved rendering in the shadows (though not as much), again at the cost of washing out some of the highlights. 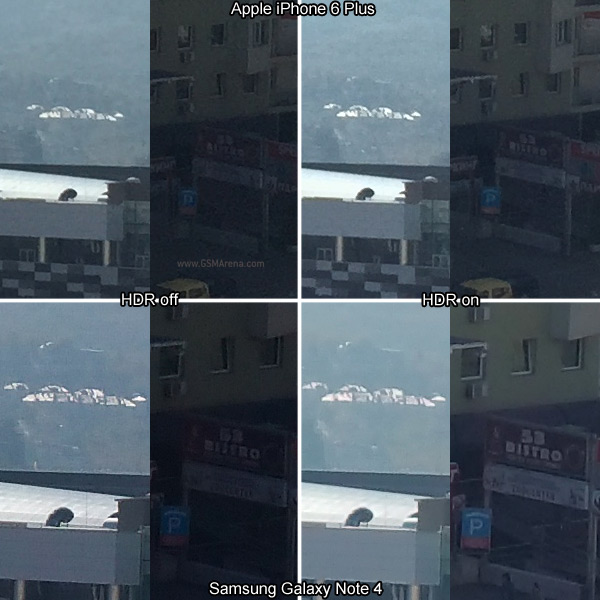 Winner: Samsung Galaxy Note 4. Its base dynamic range is wider and the HDR mode performs better.

The Apple iPhone 6 Plus did a respectable job and the Auto HDR mode is handy though the sensor is due for an upgrade.

Both phones shoot panoramas at about the same resolution (despite the Note 4's advantage in stills) and they capture more detail than just about any other phone on the market (aside from their smaller counterparts, of course).

The iPhone 6 Plus didn't get the colors right - they look far too washed out - while the Galaxy Note 4 erred in the other direction - colors have candy-like saturation. We blame iPhone's issues on a boosted green channel (you can see the green tint in the gray tarmac and asphalt).

The Galaxy Note 4 has its own issues - the building in the middle of the frame is yellow/green, while the Note 4 rendered in white. Since the photo starts from a shadowed region, the phone just hits the limit of its dynamic range. Apple's HDR panorama saves it from a similar issue. 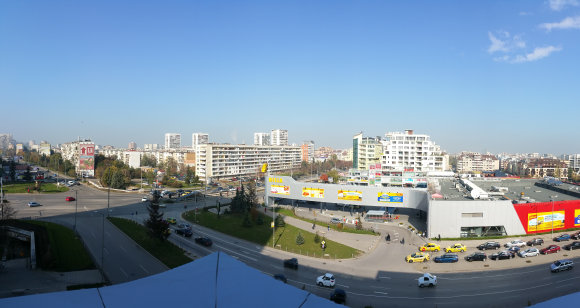 At stitching the iPhone 6 Plus proved marginally better and it captures a bit more detail in the shadows or rather applies less noise reduction, since shadows are grainier than the same areas in the Galaxy Note 4 panorama.

Image sharpness goes in favor of the Note 4 though no small part of that is that Samsung applies a heavier sharpening filter.

Winner: Draw. Detail is a trade-off made in processing - more or less noise reduction and sharpening. Don't get us wrong, these are some of the best panoramas around with tons of resolution and detail, but compared against each other they have several issues that prevent us from calling a winner.

And those are poor color rendering (both phones mangle that in different ways), the bleak contrast in the iPhone panorama and the magical, color-changing building in the Galaxy image.