The premium video mode on the Samsung Galaxy Note 4 is 2160p @ 30fps. It burns though 48Mbits per second, 256Kbps of which go to stereo sound capture (at 48kHz sampling rate). Standard 1080p videos are recorded at 17Mbps total bitrate and the same audio setup (most smartphones do 128Kbps-160Kbps for the audio). 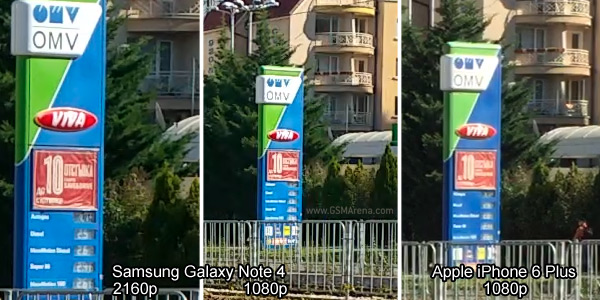 For video the Galaxy Note 4 again has a slightly wider FoV, but with dialed up processing the resulting image looks pretty sharp. The amount of actual detail in the 1080p videos for both phones seems comparable once you account for the sharpness/contrast boost.

The 2160p video, naturally captures a much more detailed scene. You can see some processing artifacts - like the over-sharpening halo around dark shadows, but it's only noticeable at pixel-peeping zoom levels.

Traditionally, the Samsung phone boosts the colors - all three channels. The iPhone 6 Plus is more restrained but it still shows the issue from previous iPhone models that red colors tend to look orangey.

The continuous autofocus on the Galaxy Note 4 triggers a bit too often for our liking but is relatively quick. The iPhone 6 Plus combines optical with digital stabilization, which results in slight shaking when there are plenty of moving objects.

1080p will perhaps be used more often than 2160p and at that resolution both cameras offer a 60fps mode. This degrades the image quality compared to 30fps but this seems more pronounced in the iPhone 6 Plus footage, which becomes noticeably softer, while the Galaxy Note 4 is less affected. 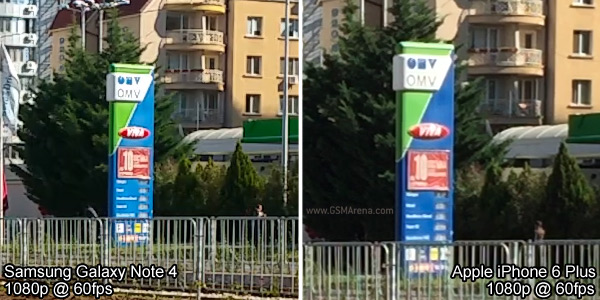 A 1080p frame is about 2MP, so both cameras have some room to offer digital zoom without degrading the quality. Both go beyond that, but from what we tested you can achieve some magnification and walk away with a usable video.

The crop below shows no zoom and maximum zoom in the first and third panels respectively. The middle panel is about the limit where the image quality starts to degrade noticeably. The 16:9 sensor of the Galaxy Note 4 is better suited to the task and has more resolution to begin with. As a result it gets us closer while keeping quality on the level, but we wouldn't recommend zooming all the way in. Same goes for the iPhone. 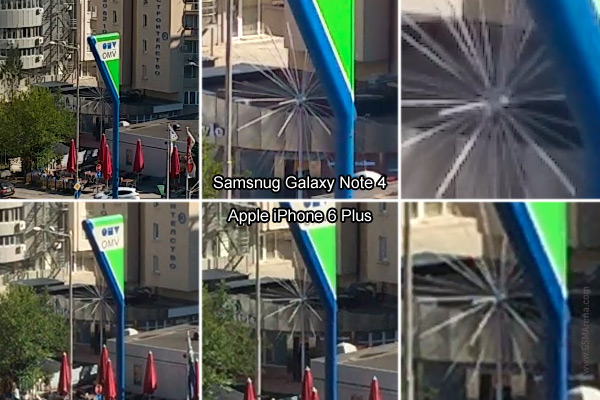 Winner: Samsung Galaxy Note 4. Since UHD TVs became affordable, a 2160p option has become a necessity for an expensive flagship. Capturing high-quality audio is a must, regardless of resolution. The digital zoom works quite well too.

We don't know why Apple avoids stereo audio, it could have at least bumped up the bitrate to improve quality. Other than that 1080p video offers good overall quality and better color rendering than the Samsung.

Both cameras boast Optical Image Stabilization, but Apple has decided to keep its digital stabilization active. It's one of the best around, but it narrows the FoV and shouldn't be needed on an OIS camera.

The OIS/digital stabilization combo seems to have worked for the iPhone 6 Plus, it absorbs the shake of footsteps better and its video appears to float smoothly. The Galaxy Note 4 corrects small shakes okay, but there's jerkiness left uncorrected.

Winner: Apple iPhone 6 Plus. The always-on digital stabilization eats into the FoV, but handheld videos are pleasantly smooth.

Samsung's first attempt at OIS in a phone isn't perfect, in fact it doesn't behave like OIS at all.

Both phablets can do slow-motion video at up to 240fps, but the Galaxy Note 4 cheats - it records 120fps video and plays it back at 15fps, instead of 30fps. So we used the 120fps mode for the Note 4 and the maximum possible 240fps for the iPhone 6 Plus.

Note that the Apple phablet outputs 240fps videos so you might need to convert them to a slower fps depending on what your video player supports (it's what we did for the YouTube upload).

The difference in FoV becomes very pronounced in favor of the Galaxy Note 4, but the image quality looks well below actual 720p. The iPhone 6 Plus video is pretty soft, but packs much more detail and lacks the over-processed look of Samsung's 120fps mode. 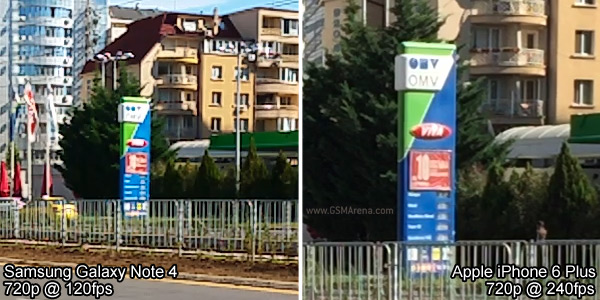 Winner: Apple iPhone 6 Plus. It slows down time twice as much and offers better quality while doing it.

The Samsung Galaxy Note 4 doesn't make the 720p mark and the videos look like the sharpness, contrast and saturation were way too high.