We've already seen that the dynamic range of these phones doesn't always cut it, so it's important to put the HDR mode through its paces. A note about the Xperia Z3 Compact and its many modes - we took a photo in Superior Auto (8MP), one with HDR on (only available at Normal mode 8MP or less) and one in Normal mode at full resolution.

The Samsung Galaxy Alpha did a great job at capturing correctly the bright sky but in doing so darkened the other areas of the image. That means it doesn't pull out any more detail in the shadows, but the good news is that the processing is good (so there's no ghosting or artifacts) and the contrast of the photo is kept high. HDR naturally lowers contrast and can look quite bad when taken to extremes.

The Apple iPhone 6 HDR mode is very quick (you can barely feel it's on) but it doesn't do much either. It lowers contrast a bit (easy to see in the gradient of the sky) and it mainly preserves the highlights, while barely doing anything about the shadows.

The Sony Xperia Z3 Compact is a good example where HDR goes too far. The photo starts looking flat due to its low contrast, which makes colors very undersaturated and kills a good deal of the fine detail as well. Superior Auto and Normal mode do a pretty decent job on their own but the supposedly intelligent Superior Auto doesn't achieve more than regular Normal mode. 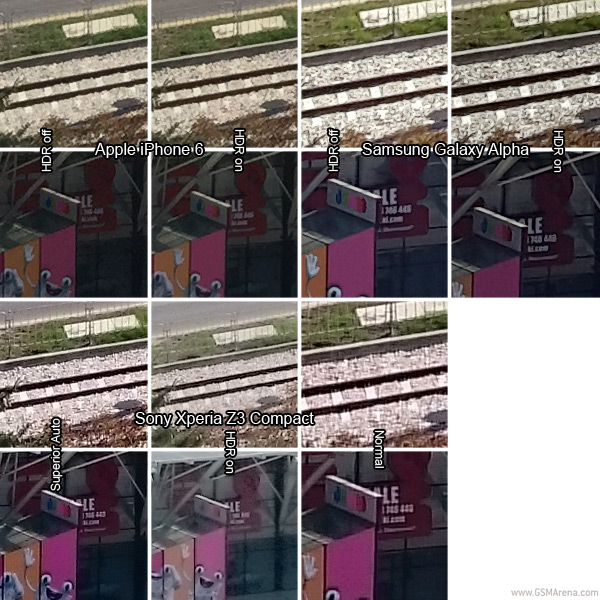 Apple iPhone 6 HDR samples: off and on

Samsung Galaxy Alpha HDR samples: off and on

Runner-up: Apple iPhone 6. The iPhone 6 HDR mode didn't do much than preserving the highlights but sometimes that's better than doing the wrong thing.

Apple reworked the panorama mode on the iPhone 6 so it achieves higher resolution. The end results are impressive - large, sharp photos with accurate stitching. The camera also does a good job of handling both shadows and highlights (which do get overexposed), which is a common problem with panoramas.

The Samsung Galaxy Alpha panoramas match the iPhone in resolution (but you have to shoot in portrait orientation). Disappointingly, stitching isn't very accurate, especially visible in the white markings on the road. Shadows were a bit underexposed and highlights go over.

The Sony Xperia Z3 Compact is quite a bit behind on resolution, sticking to a 1080p vertical. The software is also very finicky about sweeping speed (it will abort if you move too fast or too slow) and if you don't complete the full 360° circle it's a 50/50 whether it will save the image or not. When it does save it, it fills in the rest of the frame with grey area (which we've cropped out of the sample below).

Runner-up: Samsung Galaxy Alpha. It may match the iPhone in resolution but the processing isn't nearly as good, with plenty of stitching issues. The dynamic range isn't as good either.

Third place: Sony Xperia Z3 Compact. Low resolution and finicky software and the end result is a soft image with not quite perfect stitching.

For the low-light test we took samples with the flash off and on. The reasoning behind this is that smartphone flashes (apart from the rare xenon flashes) have a short reach and the flash is no help in many scenes. We've selected the best and worst photos out of several to show the consistency - handshake or missed focus can ruin your shot so it's often a good idea to take several shots unless you know the camera is dependable.

We start off with the no flash test as a baseline. Note that for the Xperia Z3 Compact we used only the Superior Auto mode since resolution doesn't help in the dark.

The Apple iPhone 6 used an ambitiously low ISO 250 and 1/15s shutter speed. Thanks to the phase detection autofocus all shots were in focus and the results are quite good - expectedly some detail was lost but noise is kept low and there's plenty of detail left. The iPhone 6 camera proved consistent and dependable.

The Samsung Galaxy Alpha used a similar shutter speed, 1/17s, but a higher ISO 400. Signs of postprocessing become very evident and the level of detail isn't as good as on the iPhone. Neither was consistency, the Galaxy Alpha suffered the most from handshake.

Sony Xperia Z3 Compact also shot at ISO 400 but at the fastest shutter speed of the three, 1/32s. This eliminates handshake issues but it slightly missed the focus in the "worst" photo. When everything goes okay photos look better than those from the Samsung (thanks to more restrained processing) but without a noticeable lead in fine detail. 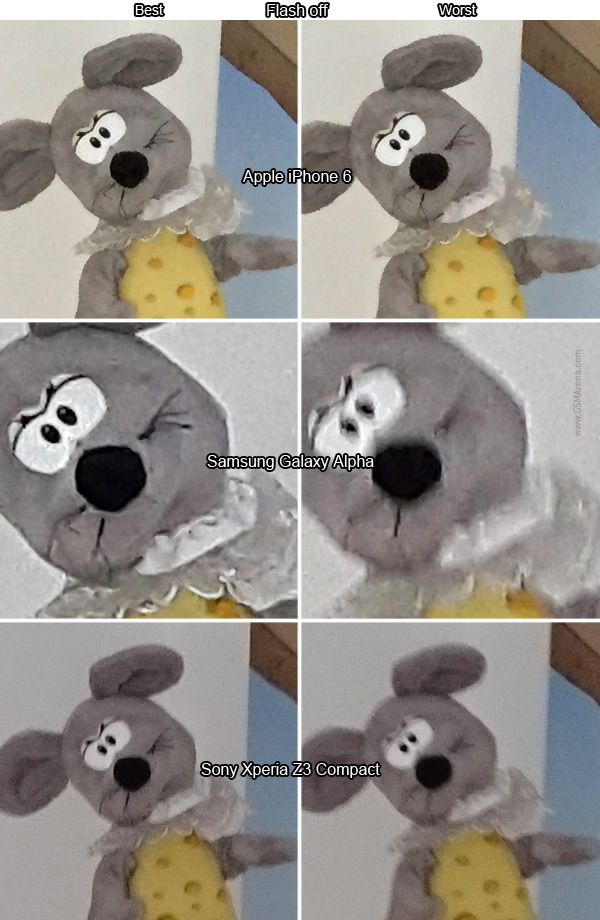 With the flash on, the Apple iPhone 6 turned ISO down to 100 and it can produce some impressively detailed shots. The relatively slow shutter can lead to off shots too.

The Samsung Galaxy Alpha both dropped the ISO to 250 and sped up the shutter speed to 1/30s. That didn't help much though, the good case scenario doesn't bring much detail and there's still the possibility of blurry shots.

The Sony Xperia Z3 Compact kept the 1/32s shutter speed and slightly decreased ISO to 320. The camera proved very consistent (better than the iPhone) and the photos have nearly as much detail as the iPhone 6 shots. 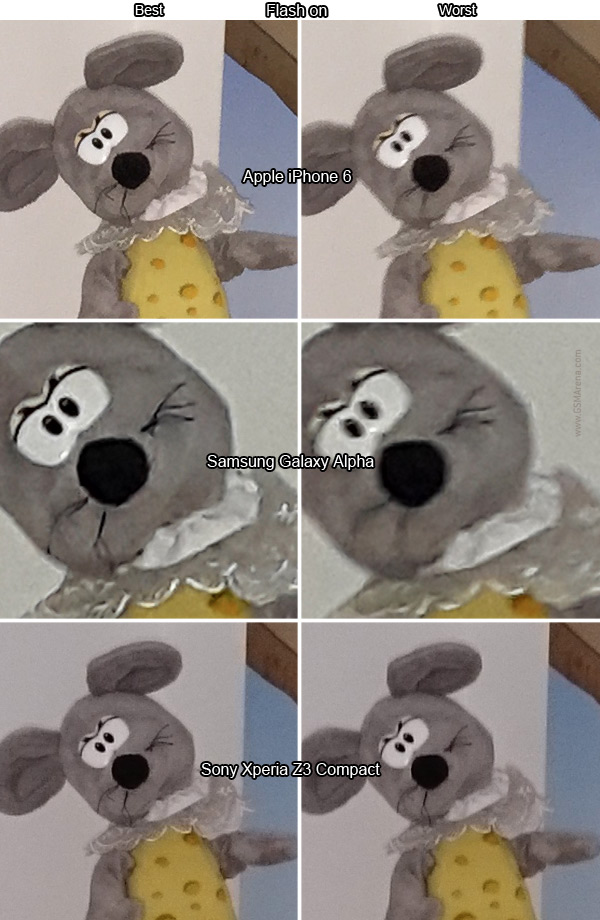 Note that the Sony Xperia Z3 Compact has a High ISO mode that goes up to 12,800. It's only available in Normal mode at 8MP and you can't select it manually, but it's the only option to make a photo in extreme darkness (much darker than our test shots) where you can't use the flash. The results are not great, but the great thing is that it's even possible to do.

Apple iPhone 6 low-light samples: flash on and off (best and worst shots)

Samsung Galaxy Alpha low-light samples: flash on and off (best and worst shots)

Winner: Apple iPhone 6. The phase detection autofocus made a big deal in consistency and the camera produces good quality shots both with and without flash. The slow shutter speed was a minor issue.

Third place: Samsung Galaxy Alpha. Heavy processing is mostly unable to resurrect lost detail and the consistency of the camera was not very good.