Wireless connectivity on a GSM network is more or less identical. All three support Cat. 6 LTE speeds - that's up to 300Mbps of download - in the few lucky regions that have these bleeding edge networks.

However, it comes with built-in CDMA support, which is essential in countries where some of the biggest carriers use that standard. The Galaxy has a separate CDMA model, while Sony stuck with just GSM (Xperias aren't hot sellers in CDMA regions anyway).

Both the Samsung and the Sony have dual-SIM versions, Galaxy S6 Duos and Xperia Z5 Dual. Demand for a second SIM hasn't gone away and it's great that you can get it in a flagship package. Unless you want an iPhone that is.

If you need speed, Wi-Fi ac networks are another way to go. There's also Bluetooth 4.1 (4.2 for the iPhone) and ANT+ for the Xperia Z5 and Galaxy S6. BT 4.x is essential for smartwatches - all three companies have their own - while ANT+ is for some sports sensors.

The three phones have NFC, but on the iPhone 6s it is used exclusively for Apple Pay. Samsung Pay is the competing service from the Koreans, while the Xperia will have to rely on Android Pay as Sony hasn't entered the mobile payment market yet. 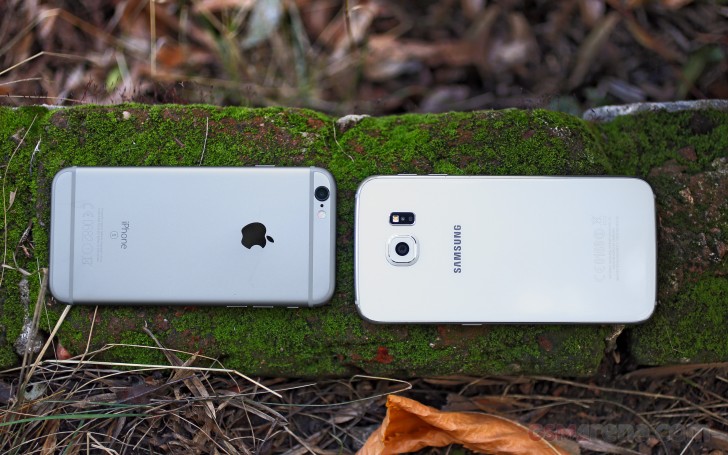 On the less common side of things, there's an IR blaster on the Galaxy and FM radio with RDS on the Xperia.

For wired connectivity, Lightning is the One True Port as far as Apple is concerned. It is reversible and can handle charging, data and audio/video (there are even headphones that use it instead of the 3.5mm audio jack). Unfortunately, for the iPhone you'd always need to rely on iTunes for transferring files to your phone.

Neither Android phone has made the jump to the reversible USB Type-C, so they are at USB 2.0 too. The base standard has been souped up with USB Host mode for external storage and accessories and fast charging though the UI for that on the Xperia Z5 is hardly user-friendly. It does have MHL for wired TV out to make up for it, while the Galaxy S6 does not.

Winner: Tie between the Sony Xperia Z5 and the Samsung Galaxy S6. Both come with pretty much everything but the kitchen sink in terms of connectivity options. Picking your own champion in this bout will essentially be up to whether you prefer to have FM radio or and IR port. The loss of iPhone is essentially a loss of the closed iOS platform by the open Android platform. Both Androids offer Dual SIM options, they allow you to use their NFC connectivity the way you prefer, and they offer seamless copy/paste functionality for transferring any file to and from the device.

Battery life is a matter of efficiency as much as total battery capacity. The Sony Xperia Z5 has the lead in the latter department with a 2,900mAh, while the Samsung Galaxy S6 comes in second with 2,550mAh. Only the Apple iPhone 6s seems to be at a deficit herewith 1,715mAh. It turns out the math is not so simple.

As it turns out all three phones have a weak battery endurance category of their own. For the Samsung Galaxy S6 it's web browsing - 11 hours is a very respectable time, but the iPhone and especially Xperia Z5 blow it out of the water. The Galaxy won out the other two categories though, it showed an outstanding talk time and a great video playback endurance.

The Sony Xperia Z5's weakness is video - some inefficiency drained its battery in 8 hours, a good 3-4 hours before the other two threw in the towel. It did win the Web challenge by a wide margin and did great for voice calls too. 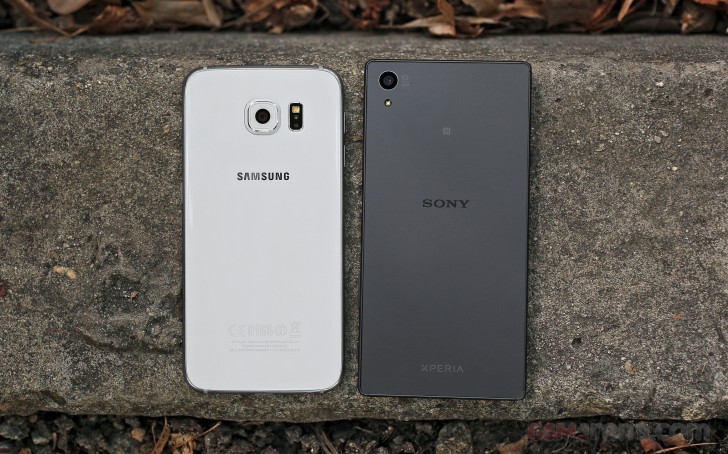 The iPhone 6s weakness, surprisingly proved to be voice calls. It didn't win any of the categories, but came in second in Web and Video. Still, the Endurance rating takes a hit. For identical usage, including 1 hour of calls a day, the iPhone 6s battery will hit 0% halfway through the third day, while the other two phones will make it to the end of the day.

Winner: Samsung Galaxy S6. Fans riled when Samsung reduced the battery capacity compared to the S5, but the latest screen and chipset allowed the Galaxy S6 to stretch those 2,550mAh quite far.

Runner-up: Apple iPhone 6s. The talk time is a serious weakness, but at comparable brightness the iPhone 6s will outlast the Xperia.

Even if you don't watch videos, you'll probably keep the brightness at above 90 nits (the middle of the slider) and the Xperia Z5's endurance numbers will drop.

We're comparing flagships here, so your piggy bank is already breathing heavily by the mere thought of you getting one, but rest assured you can load up the bill even further should you go for extra storage. Now that 4K video is commonplace - and microSD slots are inexplicably disappearing - getting 16GB storage is becoming increasingly impractical.

Think of it like this - if you have to delete files and uninstall apps before you head out for your vacation, you didn't buy enough storage in the first place.

The Sony Xperia Z5 is partially exempt from this. It has a microSD slot (the only one here) and it comes with 32GB of fast internal storage for games (they'll run from the microSD too, but with longer load times).

Both the Apple iPhone 6s and the Samsung Galaxy S6 have non-expandable storage, but you can splurge for a 128GB version. The iPhone starts at 16GB base storage (and it's the most expensive phone here!), while the Galaxy S6 is much more reasonable at 32GB base.