Over the past few weeks, DxOMark has added quite a few new Android devices to its database rating mobile cameras. We've seen the Moto X Style and the Huawei Nexus 6P perform admirably, and then there was the Sony Xperia Z5 - actually climbing to the top of the experts' charts.

However, all of that happened without the iPhone 6s having been tested. So naturally you may have assumed Apple's latest would turn out to be a solid competitor for the best of the Android world. It turns out it's not even close.

The camera in the iPhone 6s got a DxOMark score of 82. That puts it in tenth place in the database created by DxO Labs, so it's nowhere near the top dogs. Furthermore, it's received the exact same score as its predecessor, the iPhone 6. So while Apple's camera quality pretty much remained unchanged over the past year, some Android handset makers improved their games a lot and got ahead. 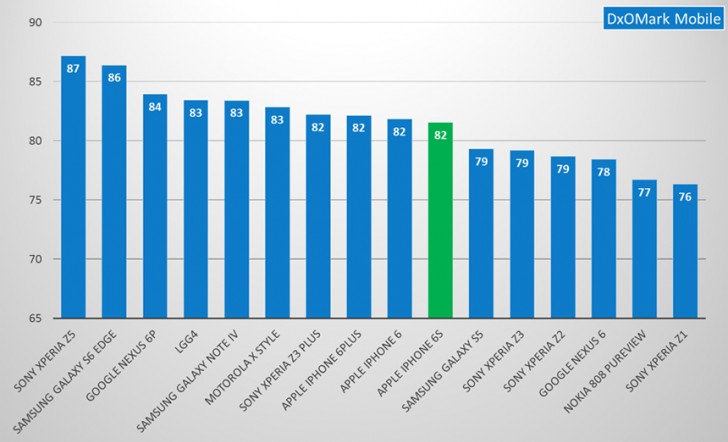 The pictures the iPhone 6s camera takes have very good exposure, pleasant white balance, and good detail preservation in bright light. What's more, the autofocus is fast and accurate. On the flip side, luminance noise is visible in low light, color shading is there when shooting indoor, a slightly yellow cast is visible for outdoor shots, and you also get occasional ghosting and other artifacts.

For videos, the autofocus remains fast and accurate, and it's also smooth. Exposure and white balance are once again good, and stabilization is effective in good lighting conditions. Yet noise is present in low light, especially in image corners, and color shading is visible in low light too.

Compared to the cameras of the phones that are higher up in the rankings, the one in the iPhone 6s simply can't keep noise at decent levels. And while detail preservation in bright light is slightly better than in the iPhone 6, it's still far from the leaders in the charts.

The BlackBerry PRIV scored an 82 when tested by DXOMark as well. It should be on the list with the rest of the handsets that scored an 82.

Go to Dxomark now and see which cameras top both smartphone and professional cameras? The Sony A7r mark 11 is the best high end top professional camera beating all the top dslr's from canon, nikon to mention a few. The Z5 camera ranks top in smartpho...

As long as the Samsung phones u mentioned are behind the Z5, Z5 compact and soon to be released Z5 premium.