In last week's article each of the three phones easily found a niche for itself, this week things aren't as clear. For many businesses Software = Microsoft, but in truth Windows 10 isn't quite ready to topple Android. And the camera will entice enthusiasts, but it's just not the new 808 PureView.

The Apple iPhone 6s Plus price is rock steady for a simple reason - demand for it is just as steady. Apple is coming out of its shell a little bit, we get more RAM, ad blockers and higher resolution camera, which erodes the feature gap between iOS and Android.

The Samsung Galaxy Note5 is sailing stormy seas - first Samsung delays the wide launch, then it runs into issues with the redesigned S Pen, all the while current Note users ask for their microSD slot back. The feature-packed era has come to a close though, it's all about the experience now, never mind the specs behind the curtain. 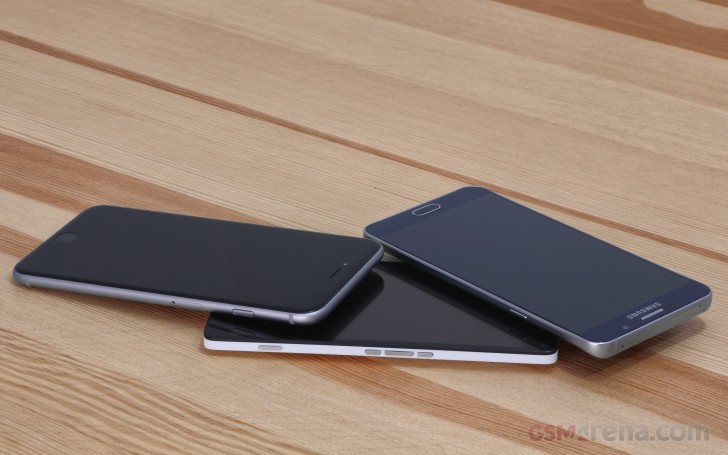 The Apple iPhone 6s Plus is a social chameleon - it looks at home in the hands of a college student, a computer geek or a high-powered businessman. This is possible because an iPhone isn't defined by its tech, QHD screens and octa-core processors is not what matters.

Instead attention to detail and quality of execution is what makes an iPhone. The screen is one of the best LCDs money can buy, the camera is quite late to bumping both the photo and video resolution, but it got it right the first time. The powerful chipset makes the 6s Plus the best pocket gaming machine and even the battery (cramped by the thin design) outlasts the average Android.

The "post-desktop era" fizzled out, it turned out that people are just happy with the desktops they have. Good for them, but that doesn't push new Windows licenses out the gate. Continuum rethinks what a desktop is and moves from tower PCs to a smartphone and a hub.

Road warriors will surely get excited at the idea, at least until they remember this doesn't work unless you have a monitor and keyboard where you're going. Also, compatible apps are few and far apart (for now!). Actually, never mind Continuum, the Windows 10 app store is pretty tiny. Still, this is the future. Allegedly.

With Continuum unproven, it's the camera that needs to sell the phone. PureView still has fans, but the competition hasn't been standing still. Where the Nokia 808 PureView was years ahead of the competition, the 950 XL was less convincing. You do get a great screen with near-perfect colors to enjoy your photos though, but not for too long as the battery life was a little disappointing.

The Samsung Galaxy Note5 can't camouflage as well as the iPhone. It used to be a power user phone, now it leans towards business people. Those are mere inclinations though, Samsung's tradition of throwing in the kitchen sink makes the Note5 versatile enough just about anything.

The screen is the best around and its S Pen buddy makes spur of the moment notes and sketches as easy as a notepad (unless you break it that is). The battery won't let you down and the chipset is great at sustained performance. The camera is a strong point too, with better hardware than the iPhone and better processing than the Lumia.

Inertia will probably keep you on the same platform as the phone you have now. But if you chose to venture out for something new - and money is no object - one of these three phones is your likely destination.