We are now fast approaching the official unveiling for the iPhone 6s and iPhone 6s Plus. Apple has held such events at the beginning of September for the past few years, and that month is almost upon us.

Thus, more and more leaks nowadays focus on when you'll be able to buy the two new devices. Today we get a leaked image purported to have originated at a carrier in France. 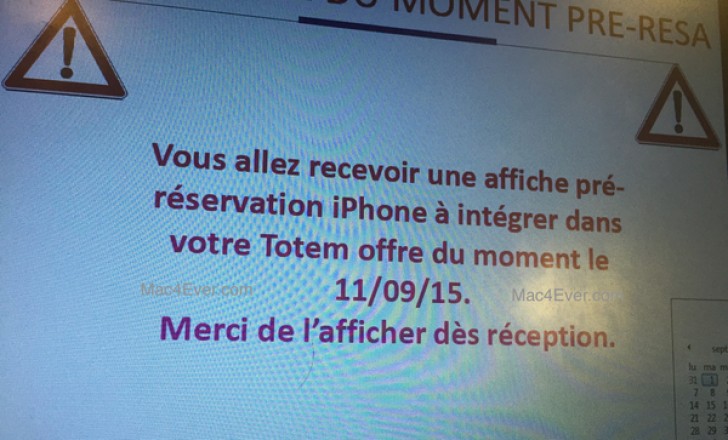 This company is allegedly informing its employees that pre-orders for the iPhone 6s and 6s Plus are due to start on September 11. That's a Friday, which also fits with Apple's actions in the past. If the company sticks to its traditional schedules, we should see the announcement that Tuesday or Wednesday, on September 8 or 9.

On the other hand, actual availability of the new smartphones in the countries that will be part of the first wave could happen on September 18, again based on what Apple's previously done with such launches.

These dates have also been rumored quite a bit in the past few weeks, so at this point we assume the only thing left to happen is for Apple to send the media invites for its event.

The new iPhones have been said to come with 12 MP cameras, a new A9 SoC, 2GB of RAM, and touchscreens with support for "Force Touch". Otherwise, they should be pretty much identical to their predecessors from last year.

I'm curious what makes your iPhone 6 "crappy"? I've had 3 iPhones and not had any problems with any one of them.