Are you ready to see something old school? We’re talking about chunky bezels and a physical home button – we’re talking about what could be the iPhone 9 / SE 2. A short hands-on video surfaced of this alleged “affordable iPhone” that has been all over the rumor mill for a while.

It’s hard to determine the authenticity of this video. The design doesn’t match with the OnLeaks renders as the sides of the device appear squared off, a throwback to the iPhone 4 through 5s design. The thick top and bottom bezel on the front and the single camera on the back do match the renders, this phone will miss out on half a decade of innovation in smartphone design.

A 3.5mm headphone jack is not among the many old school design choices on the phone. The phone will be powered by the latest Apple A13 chipset, though, which puts it in competition with even the top 2020 Androids.

In case you’re wondering, the iPhone 9 / SE 2 is supposed to have a properly tiny 4.7” screen – that’s larger than the original iPhone SE (4.0”) and while the bezels make it larger than it needs to be, the phone is still quite small by 2020 standards.

The OnLeaks renders of the iPhone 9 / SE 2

The mint green color matches one of the hues available for the iPhone 11. Here’s another render that imagines the possible colors of the new phone (but it also shows rounded sides, unlike the device in the video). 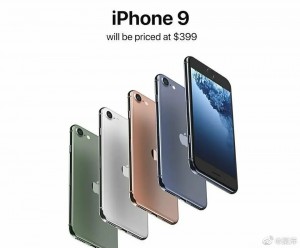 A render of the iPhone 9 in different colors

The iPhone 9 is expected to be announced in late March, a couple of weeks later than the original schedule (as the coronavirus outbreak has impacted the factories meant to manufacture the phone).

That is just an iPhone 8 with frame and back mod, the fact that this is not an iPhone 9, GSMArena should have delete this news

Of course they are recycled. Were you expecting a banana shaped design?