iPhone OS 4.0 is now official with over 100 new features

The sneak peak event on iPhone OS 4.0 is now over. Steve Jobs was on stage and he promised tons of new stuff for the next-gen iPhone OS. There's multi-tasking, app folders, social gaming plus so much more.

As you'll see from this slide there are many new interesting features, but in their presentation Apple decided to concentrate on the "7 tentpole ones" - as they call them. 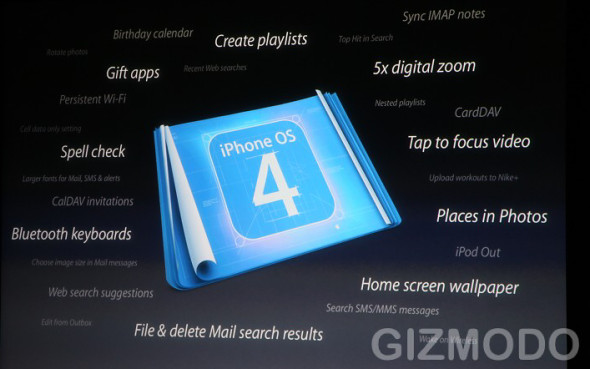 Multi-tasking on the iPhone - well, how about that! It took them 3 years and three (almost four) generations of iPhones to come to that. They know they're late but Steve Jobs is promising their implementation is the best so far. And multi-tasking won't slow down or drain the battery.

The way they do it on the front-end is simple. Double tap the hardware key and the task switcher appears as a dock below whatever app is running. Oops, there goes our only shortcut key.

On the back-end things are different. Instead of keeping all apps running in the background, they allow apps that need multi-tasking access to 7 background services. So it's actually the services that run in the background - not the actual apps.

The background services seem more than enough to cater for the needs of various applications. They include background audio, VoIP, background location, push notifications, newly implemented local notifications, task completion and fast app switching service that takes care of returning apps to you in the way you left them even though they DIDN'T actually run in-between.

The new local notifications will allow scheduled alerts such as one from a To-Do app. Finally!

Next up are folders. But not the file system variety. No, sir! You're not getting a file manager on the iPhone just yet.

The new iPhone Folders will do what the Categories app does for jailbroken phones. It allows grouping of applications into meaningful categories (such as Zombie Games, for instance) so you don't have to flick through all your homescreens for some blood-splatting action.

The Email app on the iPhone now will offer a common inbox for all email accounts setup on the phone. No more flicking back and forth. And corporate users will be glad they can have more than one Exchange account setup.

Fast inbox switching is also available now along with threaded email conversations. And you can also open attachments with an application you've downloaded from the AppStore.

The iBooks e-book reader you've probably seen demoed on the iPad will now be available to the iPhone as well along with the iBookStore and free copy of Winnie The Pooh (not kidding!).

With iPhone OS 4.0 gaming will get a new social networking aspect bringing it up to speed to the Windows Phone 7's Xbox Live interconnectivity.

The final "tentpole" of the new iPhone OS is a new mobile advertising system for the iPhone, iPad and the iPod touch that called iAd.

iAd will allows developers to integrate ads into their apps so that they can possibly release free, ad-sponsored versions of their apps.

With iAd users will be able to click on advertisements and check them out (even video content) from within the application they originally saw them in.

Apple will be selling the iAds and will host them as well. In return they'll be getting 40% of what the advertiser is paying. Developers get the rest.

As of iPhone OS 4.0, users will be able to add a wallpaper image to the springboard itself. It's something jailbroken iPhones have had for years, but it's nice to have it out of the box as they do on the iPad.

Setting up a wallpaper image

The new iPhone OS 4.0 will be available this summer (along with the new iPhone we presume) but they're issuing a developer's preview today so we should hear a lot more about those new features in detail in the coming months.

The iPhone OS 4.0 will be available to the iPhone 3G and 3GS as an update. However many of the new features, INCLUDING multi-tasking won't work on the iPhone 3G. There's no word about the iPhone 2G yet.

And since the iPad is a hot topic right now - yes, it's also getting an update to iPhone OS 4.0 - however later on - in the fall.

So, you are only one person in the world who dont know how to send mp3 songs properly..

Also, if you're right next to me, why don't you just type in the contact info yourself. I think that's even faster than bt, geez louise.