iPhone sales in the US up while others stagnate

According to the latest survey by Nielsen, 38% of mobile phone users in the US now own a smartphone. Also, out of all the people who purchased phones in the last three months, 55% purchased a smartphone, up from 34% last year. 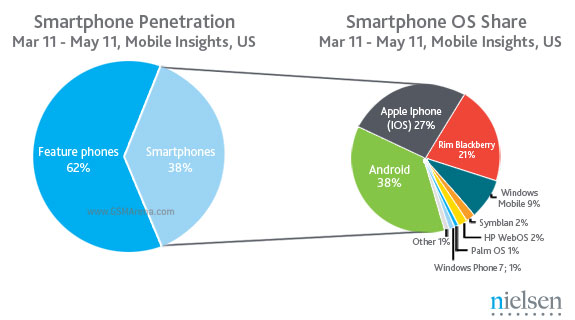 The current leader in terms of sales is Android with 38% market share of all the smartphones in the US. In second place with 27% users is Apple with their lone iPhone and in third place is RIM with 21% users.

An interesting observation made by Nielsen suggests that contrary to popular belief it is the iPhone that is driving smartphone sales in the US with the maximum amount of growth in the last three months. Android sales, on the other hand, have flattened over the same period of time, despite new phones being launched every week. 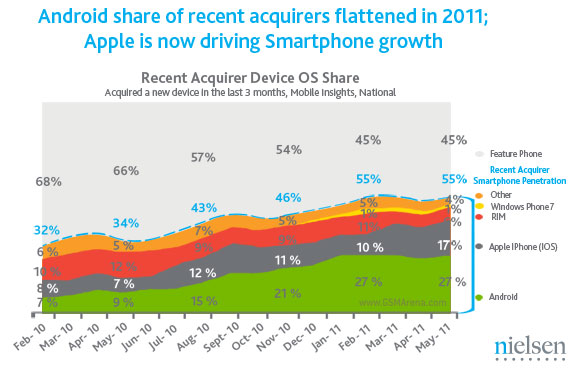 The reason for the growth in iPhone sales could be attributed to the launch of the Verizon version, along with the white model. Now with Apple selling unlocked versions of the iPhone 4 in the US the numbers are likely to go even higher. However, the real growth will be observed later in the year during the last quarter, when the next generation iPhone goes on sale. Google too would be launching Ice Cream Sandwich, hopefully along with a new Nexus phone. Meanwhile the likes of RIM are likely to continue getting the lukewarm response unless they come up with something groundbreaking.

Tom... Your point is inconclusive since the iPhone link ALSO has older iPhones mentioned. And since we are talking about 80 million iPhones sold vs 13 million galaxys I guess that sorta makes you the BLIND fanboy. And remember Samsung and the B...

If your not totally blind, the first Galaxy S phone was in that number.

Tom check out this, i remember some here put the year old phone satisfaction stats and samsung was at bottom. Here's the new fresh stats: http://thecellphonejunkie.com/2011/03/19/iphone-still-on-top-for-customer-satisfaction-says-jd-power/ ...