iQOO 7 runs Geekbench, the 120W charger will fill half the battery in 5 minutes

There’s no time to waste – the iQOO 7 will be officially unveiled on January 11 and the phone still has things to check off its to-do list. It already ran AnTuTu (iQOO mentioned the results in a Weibo post), now it has gone through Geekbench too. Version 5.1.0 of the benchmark specifically. iQOO 7 putting its Snapdragon 888 chipset to the Geekbench test

Anyway, iQOO is boasting that the 7 will have LPDDR5 RAM (12 GB of it, as you can see in the bench results) and UFS 3.1 storage. To highlight the phone’s performance, the iQOO 7 will be featured in the KPL esports league. 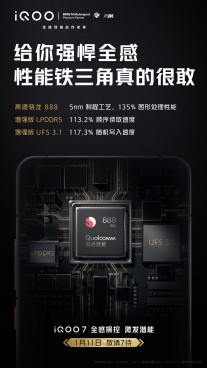 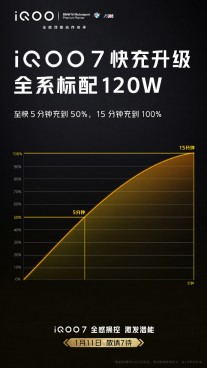 The phone will support insanely fast charging too – the 120W charger will get the battery from 0% to 50% in just 5 minutes and a full charge will take only 15 minutes. Standard USB Power Delivery will be supported up to 65W as well.

The iQOO 7 will also debut vivo’s new OriginOS and there will be a BMW-branded version of the 7 Pro model.

Not sure what sort of data mining your doing with your phone but for me a flagship should have great cameras, Samsung Amoled display (minimum 500ppi), expandable storage, the latest and greatest SoC, 8gb ram (or higher), 128 GB it's 3.1 storage ...

Will last more than what Apple and Sony will last. These are specially designed batteries. Your Apple and Sony are being cheap. Tell them to shell out some cash for latest tech.

No effect? Fast charging must be standard. This isn't a budget phone where one is happy making compromises.