Android in Nov 2012: Jelly Bean and ICS continue their growth

The Android distribution statistics for November just arrived, showing an over two-fold increase in the Jelly Bean market share. 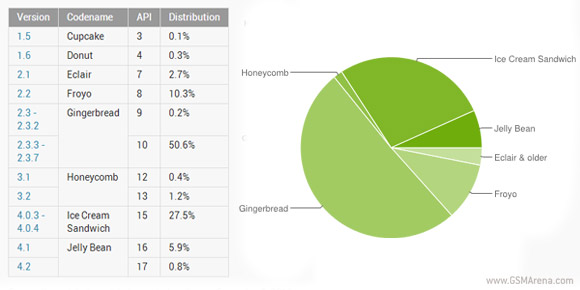 Version 4.1 Jelly Bean is now on 5.9% of the Android devices from 2.7% last month, while the recently released 4.2 Jelly Bean already powers 0.8% of the droids out tehre. Undoubtedly, the release of the new Nexus devices has to do something with it, butthe release of JB updates from Samsung and HTC has also helped a bit.

The Ice Cream Sandwich share also grew to 27.5%, 1.7 percent points higher than it was in October. It's unlikely for this number to drop below 20% any time soon, as the majority of low- and mid-range devices are now rocking this Android version of the OS out of the box.

To check out more details on the latest Android distribution numbers, check out the source link below.

the best? GINGERBREAD is the best bugs of this OS are fixed we can compare this to windows xp, a perfectly built OS... JELLY and ICS lots of bugs....

How did you do that??