Just over a couple of weeks after investment firm UBS said Apple sold 69 million iPhones in the quarter ending in December, KGI analyst Ming-Chi Kuo, who has a decent track record on Apple-related industry predictions, has estimated the number to be 73 million, including around 42 million iPhone 6 and 16 million iPhone 6 Plus. 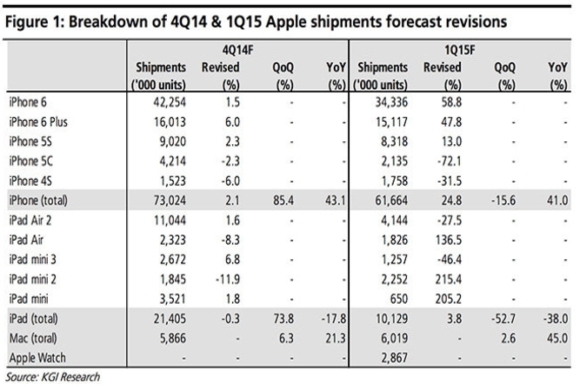 For Q1, 2015, Kuo is expecting the figure to be around 61.6 million, up 41.1% year-on-year, but 15.6% less than the previous quarter, something which isnt exactly surprising given the fact that it was a holiday quarter.

Lastly, just like others, Kuo is also expecting a March launch for Apple Watch, and is predicting total shipments of around 2.8 million units for Q1 this year.

why do i find you in every second droid thread?and when i ask why you are writing there you delete your posts.......very disapointing and frustrating for one who says droid fans are frustrated.....

perfect description of iphone "Real techies buy stuff based on their own needs, the usability of the product and how much value it delivers which is why Android has 80% market share in the real smartphone user community. iOS doesn't even prop...

Actually the best smartphone is the Samsung Note series.