Google has released Android distribution numbers for the month of August. The latest stats reveal a 13.5% share for the Nougat OS, which is up around 2 percentage points compared to last month. 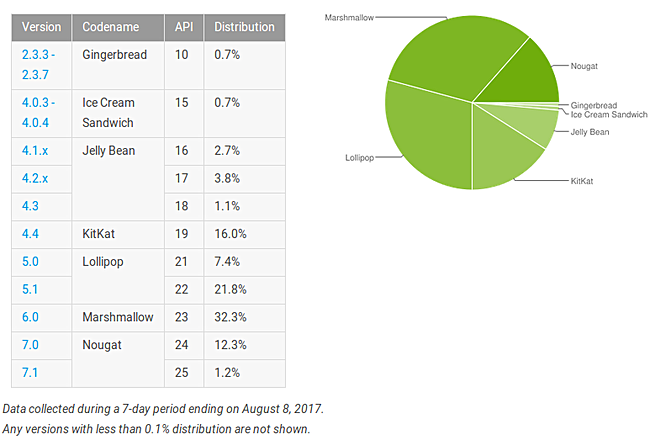 Specifically, Nougat version 7.0 is now on 12.3% of devices, while version 7.1 is on just 1.2%. With 32.3%, Marshmallow is still the most widely-used Android OS version. That number represents a slight increase of 0.5 percentage points from previous month.

While Lollipop and KitKat also have significant shares, there has been some drop when compared to numbers from July. Jelly Bean now powers 7.6% of all active Android devices out there (a minor drop), while the share of Gingerbread and Ice Cream Sandwich remains the same.

I have nougat on galaxy a5 2016 and I don't have blue light filter. Lacks a lot of features.

Hmm... that logic can apply to my choice of a tin of beans. So if I buy Tesco beans, do I have a responsibility to those that buy Del Monte or Hunt's?