Android in Sep 2012: Poor growth for Jelly Bean and ICS

The latest Android distribution figures are in and things don't look a lot better for Jelly Bean and Ice Cream Sandwich over last month. 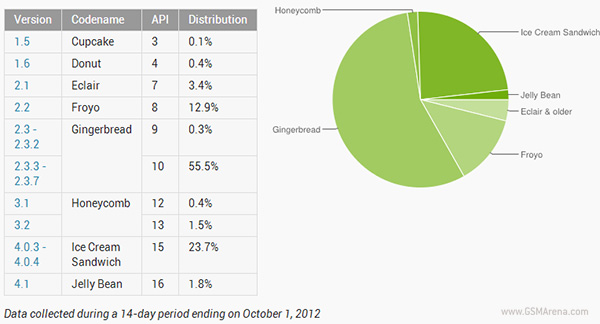 Jelly Bean, which made its debut couple of months ago, has doubled its user base in that time but still stands at a lowly 1.8%, compared to 1.2% last month. With major Android manufacturers such as Samsung and HTC now planning on releasing their Jelly Bean updates starting this month and the launch of the Galaxy Note II, we can expect to see a major jump in this figure in the next couple of months.

Ice Cream Sandwich, on the other hand, has slowed down after a strong couple of months, with the user base going from 20.9% to 23.9%. Again, this figure could see a bump once Sony, Motorola and others finish their ICS update roll out. We don't expect major increase in this number in the future as manufacturers shift their attention to Jelly Bean for the new devices and a ton of old ones being permanently stuck on Gingerbread.

Speaking of Gingerbread, the perennial Android update is now on 55.8% of Android devices, down slightly from 57.5% last month. With most devices comprising this number being low-end Android devices that would never see an update in their life, we don't expect this number to go down anytime soon.

The only way Gingerbread user base would go do significantly is when people eventually get rid of these devices and move on to something running a newer version of Android. With a bulk of Android sales being low-end Android devices whose owners are unlikely to upgrade quickly, again, this number isn't going to go down anytime soon. Make no mistake folks, Gingerbread is here to stay a while.

For more details and data, click on the source link below.

The beauty of being on android is custom roms .it doesn't matter what kind of phone ur using,some ppl like simple so the problem with updates wont matter to most ......unless ur a tech head .me ,I prefer custom Roms which allows me to keep my phone l...

Nightmare for developers! Google do something!