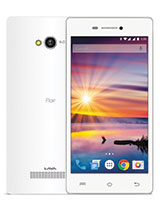 this phone is waste.it is useless for noting.i bought this phone on 2015 october.it worked well for the first three months.then the problem started suddenly.once the phone is off or restarted it never on`s.for 12 times i have flashed my phone and 11 times i have changed the software.....please ever never buy this phone.itz a loss of money.

lots of problem with this phone contacts get disappears, outgoing call problems, heating problem and height is play store and youtube will stop working

1.My contacts are disappeared
2.software update is 27mb but itwill not installation

Hemraj, 11 Jan 2017I have my lava flair z1..it,s battery backup is very bad...and i run 3 times to service centre... moreI am also suffering from this problem.
So bad battery backup.

I have my lava flair z1..it,s battery backup is very bad...and i run 3 times to service centre..dump this

does this phone support LTE?

Sai, 09 May 2016Why can't i update my lava flair z1 that update of 27mb its not installingI got the same problem

Anonymous, 22 Jul 2016Every time i open it it shows unfortunately theme has stopped .Wat should I do plan helpKindly update your Inbult Apps in playstore

Every time i open it it shows unfortunately theme has stopped .Wat should I do plan help

It's a best phone in small budget .it's battery backup is also nice and it is better than phones of other companies

There are many problems with this phone.
1. Performance is very slow
2. 3G mode won't work completely
3. Battery backup is very low
4. Outgoing call problems
5. Camera clarity is null
6. Phone contacts will disappear frequently, need to restart for this.

This phone is really messed up with you in your mind . It does't let you to work properly. within a week i have to run a sevice center . Even do I don't like what it do. I better tell everybody not to purchase this company phone if you don't want to messed with a value of a time.