Hold on, we're not through the leak storm just yet. There are four LG handsets headed towards AT&T, ranging from a unpretentious business phone to more stylish full touch phones. The specs of these phones seem almost final and they should be out by the end of the year.

First, we take a look at the LG Opera TV, which looks very much like an Arena, perhaps too much to be a coincidence. Plus the internal name for the Arena is Opera... Either way, the Opera TV's specs are just as juicy. 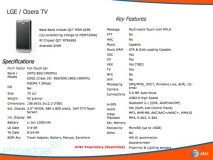 The 3 inch WVGA touchscreen, 5MP autofocus camera and quad-band GSM plus dual-band 7.2Mbps HSDPA of the LG Opera TV are in line with the Arena, and so are the GPS, Bluetooth with A2DP, however Wi-Fi is missing. It has hardware graphics acceleration so it just might run the excellent S-Class UI. It earns its name by supporting the MediaFLO technology, which is a mobile TV protocol for handhelds used in the US.

Yesterday, we reported of an LG phone with QWERTY keyboard and Windows Mobile 7 (yes, 7), but here's another one that'll come sooner - the LG GW600 Herald. It brings a half-QWERTY and the good ol' Windows Mobile 6.1 - a mid-range business phone for sure, but GPS and HSDPA are points in its favor. 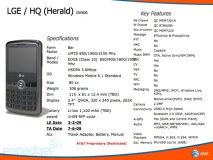 There's a refresh of the LG CU720 Shine - the imaginatively named Shine2. The biggest changes are the addition of GPS and cutting down a good 20 grams off the previous incarnation plus the camera, which seems to have lost the autofocus but that's hardly a big deal for a 2MP camera. Note that the photo is marked TBD, so the design will probably change, hopefully to something less gloomy (its called Shine after all). 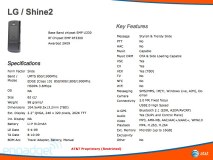 The other slider - the LG Georgia - is a little more enticing with a 2.8" WQVGA touchscreen, GPS, 3 megapixel autofocus camera and MediaFLO. 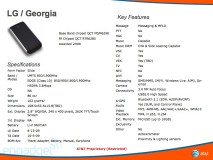 There's nothing about pricing but all four should be out by mid-October. The LG Herald comes out first in early July, followed by the Shine2 and Opera TV in early and late August respectively and the Georgia coming out last in early October.

Herald and Georgia are the copy of Blackberry ..

What is wrong with LG do they no that a 3inch screen is not the maximum u can get, RELEASE a 3.2 one for god sake 3inch is slightly to small, ggggggrrrrrr.