Nexus Prime is the name of the Verizon Galaxy Nexus

Just a few days ago Google released an official video featuring a Verizon-branded Galaxy Nexus. It was more than enough to prove the third installment of the Google phone is indeed coming to Verizon's network.

Today we have an addition to that story. A leaked Best Buy ad shows the Verizon's Galaxy Nexus will be actually called Samsung Nexus Prime, most probably for easier differentiation among the international model. 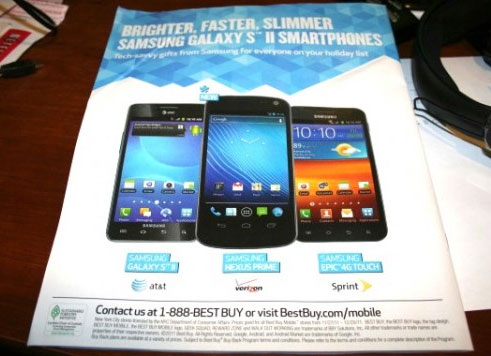 That's pretty much all the new info. The Nexus Prime will most probably hit the Verizon stores in a couple of weeks and should cost $300 with a two-year contract.

Volume defects and everything, right?

yes, i agree with you i live in US, and phones comes late and limited.also smartphones here gets modified by the carriers and changes its name but they are all the same. stupid right...that's why i always buy unlock phone. oh and in my opinion, most ...

Why dose Verizon get the cool name :(