The rumor mill says that the next-gen iPhone will be a dual-mode device and work on both GSM and CDMA networks - so the iPhone 5 in question might just be a Sprint-subsidized unit, rather than different hardware. While the September 5th launch rumors didn’t pan out (unless Apple scheduled an event today and told no one), there was a lot of chatter of an Apple event for Wednesday - but that‘s rather iffy too. 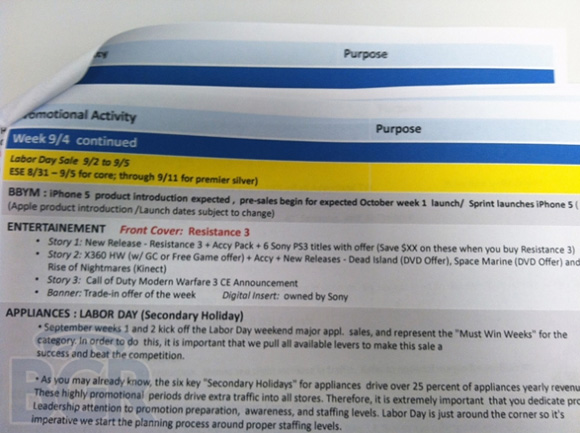 Anyway, Best Buy’s document says “October week 1 launch” so we could be a month away from the first iPhone 5s getting into people’s hands. Furthermore, the doc claims that pre-orders start as soon as this week, which obviously implies an impending official announcement too.

We’ve seen so many rumors about Apple’s next wonder phone that we’ve grown very skeptical - there seems to be a “iPhone 5 launches this week” rumor every week. Same with the phone’s specs - the latest string of rumors insists the screen will be 3.7” big.

Whenever the actual launch is, it can’t come soon enough - people’s levels of curiosity are through the roof.

i am not bothered abou the IP5 at all. I have purchased the 4 just recently and am completely happy with it. Apparently the only difference between the 4 and the 5 is ios5 obvs and duel core. Still no flash etc.... so rather than waste money on the 5...

why wait sgs2 is awesome!!! no limitations! Reality check peeps!!!