A leaked diagram which allegedly reveals the physical measures of the upcoming Apple iPhone 6 made the rounds on the web. Unsurprisingly, the document suggests that the next smartphone to come out of Cupertino will have a significantly larger display than the iPhone 5s. 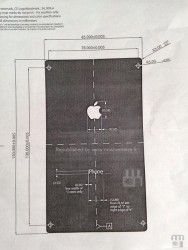 According to the leaked diagram, the iPhone 6 will be 150mm long and 85mm wide. The measures rival those of the Samsung Galaxy Note 3 (151.2mm long and 79.2mm wide), thus suggesting that a phablet is on the way.

The leaked document falls in line with older rumors. We have heard on a couple of occasions in the past that Apple will release two large screen iPhone handsets in the second half of this year.

December is a month not a year.

i'm not an iphone user but i think Apple Iphones are the best phones in the worlds. Thanks.

I believe a lot of samsung users, those who don't like their phones after bought it for large screen, will go back to iPhone :) a potential fight back from iPhone. Dec 2014 will be a good year for Apple. I am NOT using iPhone and not an iPh...