Following yesterday's specs leak of the upcoming Sony Honami, another image has popped up showing off the new camera interface of the anticipated nextSony flagship. 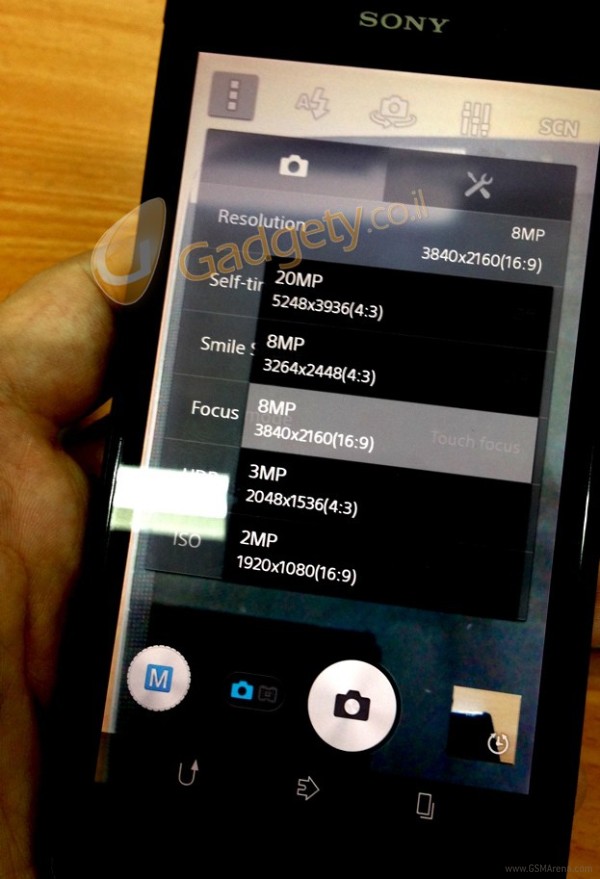 Now the 20MP sensor and the redone camera interface aren't exactly news - the latter is even available for current Xperia flagships via a leaked ROM, but it's the first we see it running on the actual phone. The above image also reveals that Sony has been hard at work trying to match the smartphone camera offerings by competing manufacturers like Samsung, and, more recently, Nokia.

Back to the Sony Honami - the smartphone is said to feature Sony's G-lens and BIONZ image processing for its 1/2.3" image sensor. The device will have a 5-inch 1080p display and will be running on a Snapdragon 800 chipset with a 2.2 GHz quad-core Krait 400 CPU, Adreno 330 GPU and 2 GB of RAM. There will be 16 GB of expandable storage and the whole thing will be powered by a 3000 mAh battery. Like most recent high-end Sony smartphones, the Honami will feature IP57 dust and water resistance.

Sony will officially announce the Honami at its IFA press event in Berlin on September 4.

Thanks, gmfady, for the tip!

SONY`s the most miserly larg company around the world ! they`d selling 1.2.3" sensor as it 1" sensor by adding more pixels to it`s images !!! that`s SONY and guess what ? there`s no walkman chip in this phone because the mise...

Just 1/2.3" sensor size? Joke of the year. Sometimes it's hard to carry your dslr in your pocket and a cameraphone is a must have. Well, if picture quality is what you want then look no further, pick a Nokia 808 or 1020. This Sony phone with jus...