According to a leaked internal document sent to us by an anonymous tipster, Huawei is working on an Ascend P7 smartphone that's currently going under the codename "Sophia".

The Huawei Ascend P7 is going to be a major update over the Ascend P6 and will feature a 1080p 5.0" TFT LCD display. Under the hood of the phone, Huawei is betting on the HiSilicon Balong 910 chipset with a quad-core 1.6GHz CPU, 2GB of RAM and 16GB of internal storage. Happily, it's expandable thanks to the microSD card slot. 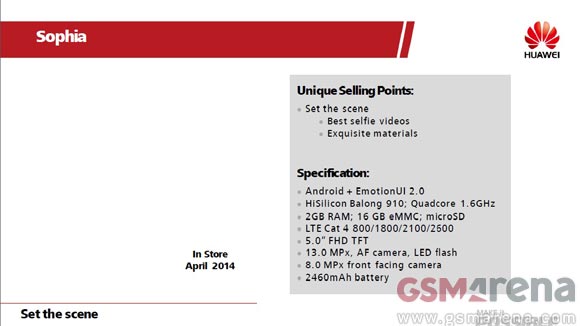 As you can see the document states that the phone will be made of "exquisite materials" and as our tipster points out, the phone looks very similar to its predecessor. We won't be surprised if Huawei bets on metal for the chassis once again. Another unique selling point of the Ascend P7 would be the ability to take the "best selfie videos" as Huawei puts it.

The company aims to achieve this thanks to the front-facing 8MP camera. At the back, there's going to be a 13MP auto-focus snapper with LED flash. The smartphone will be powered by a 2460mAh battery. The Huawei Ascend P7 will be LTE-enabled with support for Cat 4 at the 800/1800/2100/2600 bands.

The phone runs an unspecified version of Android garnished with the company's own EmotionUI 2.0, which isn't that surprising.

If the document is to be trusted, Huawei plans to release the Ascend in April next year. Pricing is yet to be detailed.

Hat tip to our anonymous tipster!

TFT is ideal. It has low viewing angle, which is perfect for a phone. I do not want everybody looking at my screen.

Nope, TFT was invented years before IPS and often has poor viewing angles, just like what Sony uses in its phones. In short, avoid it if you can.