Current Windows Phone 7 owners might have to wait until Q1 of next year to get their 7.8 update, but at least now we have some idea of what the update will bring. Microsoft officially promised a WP8-like start screen with resizable tiles, but leaked in-house training materials from Nokia give more details.

The lock screen will be customizable - users can pick an app to update the lockscreen periodically, something that sounds a lot like WP8's Live Apps service. 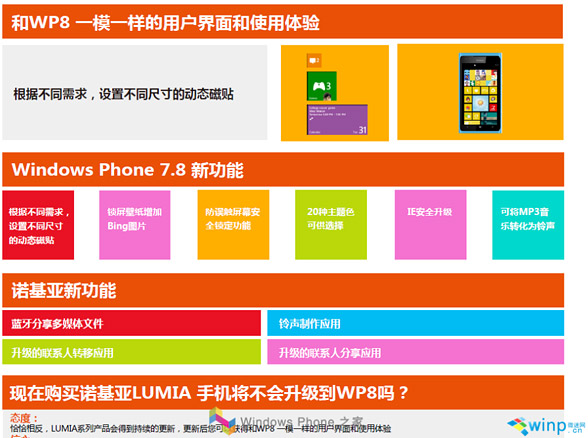 Internet Explorer will be updated with enhanced security, but it seems like Windows Phone 7.8 will keep using IE9 and won't get IE10. Another perk of the updated OS will be the MP3 editor that can be used to create ringtones out of songs. There will be more system colors available too, for a total of 20.

Phone makers will be adding their own touches to the 7.8 update. Nokia, for example, will add support for sharing media files over Bluetooth (for non-DRM protected files), update the Contacts Transfer app and enhance the ringtone editor.

We shouldn't have to remind you that neither leaked training materials nor Facebook posts are particularly solid information, but until Microsoft officially spills the beans on the Windows Phone 7.8 changelog, it's all we have to go on.

I don't care much about Apple either, but iPhone4S is the only option for me because of enough small size and sharp display.

except SmartGlass is already on 7.5

I agree I love my Lumia too! The reason why I'm a bit annoyed ms have nt released 7.8 earlier, good stuff!