Leaked render shows off the Moto Z4 from multiple angles

A render of the Moto Z4 that leaked back in March revealed its design. Now, another image of this Motorola smartphone has surfaced which shows it off from multiple angles.

This image of the Moto Z4 comes to us courtesy of reliable leakster Evan Blass. It shows the front of the smartphone that has a waterdrop notch display surrounded by tiny bezels, and at the back, it has a single camera accompanied by Motorola's signature bat-wing logo and pogo pins. 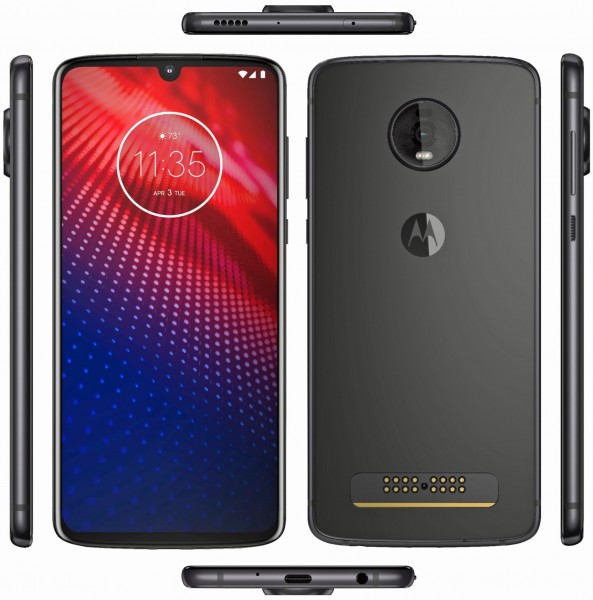 The Moto Z4 also has a camera bump which means it will likely wobble if used on a flat surface. On the right side of the phone are volume rocker and power button, and at the bottom is a USB-C port flanked by a 3.5 mm headphone jack and a microphone. Up top, the Z4 has the secondary mic and a SIM card slot along with a speaker which is a bit weird as speakers are generally placed at the bottom of the phone.

There's no fingerprint scanner in the picture here which means it might come embedded to the screen.

Specifications of the Moto Z4 which leaked last month include Snapdragon 675 SoC, up to 6GB RAM, 48MP rear camera, and a 25MP selfie snapper. The smartphone will also support 5G Moto Mod, sport a 6.4-inch OLED display, and pack a 3,600 mAh battery with TurboCharge support.

Why are companies still making phone with a camera mountain sticking out! and that camera bezel on the front is hideous! Stop copying other manufactures. No wonder Sony LG Moto HTC and Nokia going down like the plague!

I hope it will be cheap. I really want it.

Nice phone..wish it came with a bigger battery. But i like the Moto mods (battery and Speaker mods). I really wish Motorola had the SD855 at the core of this phone. Also a very good camera will go a long way to make this a good seller.