Leaked RIM roadmap reveals a really boring 2012 ahead of us

A recently leaked RIM roadmap reveals all the upcoming BlackBerry smartphones for 2012. Unfortunately there is nothing really interesting scheduled before November this year. 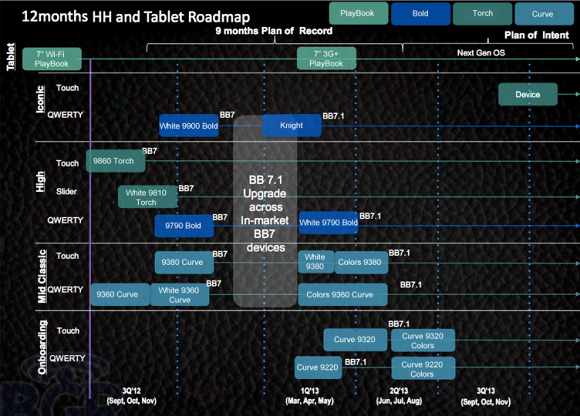 Notice you should consider the mentioned months, not quarters

The BB OS 7.1 update is already out for all compatible devices, while RIM is expected to demonstrate the newly announced OS 10 at the upcoming MWC.

Speaking of OS10, the first smartphone to run it - codenamed London - is scheduled a bit later than expected - November 2012 or later.

Finally, if you have been waiting for a 3G-capable PlayBook tablet, it's coming in Q2 2012 quarter.

As you can see there is nothing really impressive on the roadmap (and Milan is expectedly absent), but we should have been prepared for that already. Whatever the next OS is like, RIM is still the RIM we know - always behind the others.

Another miss. Playbook 3G due in May and again nothing so more lost sales, with no info coming from Rim. Simply bad management. I like BB but now think they will fall on their sword as no one will buy product which is stock-piled, already obsolete wi...

I don't agree with most of negative comments about BB. I use Bold 9780 and 9900 and they are both great machines! I wouldn't change them for any other brand! What I need from BB is a dual SIM 3G device. BB devices have style and they are working wi...