A research conducted by an investment bank has given us a roadmap of upcoming Qualcomm and MediaTek chipsets along with some interesting details.

According to the finding shared by a Weibo user Qualcomm is looking to release the Snapdragon 865's successor - the Snapdragon 875G sometime in Q1 next year. It will be based on Samsung's 5nm EUV process, although initial rumors said that TSMC will once again be manufacturing the silicon.

Qualcomm is expected to quickly follow that up with the launch of the mid-range Snapdragon 735G chipset based on the same 5nm EUV process. An entry level Snapdragon 435G chipset will debut at about the same time. 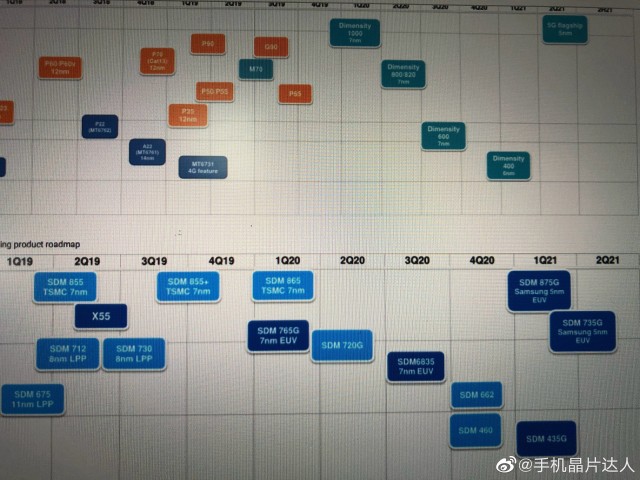 The roadmap the researches compiled

MediaTek also has some good things in the pipeline. In Q3 this year we should be seeing the Dimensity 600 based on a 7nm process, but we knew that already. More interestingly the Dimensity 400 is expected around the turn of the year. It's listed as a 6nm chipset, but we guess that means it will combine 7nm and 5nm elements.

Hey Android Master. I think i know Kirin's efficiency recipe. Maybe It's because of the new "Dynamic Latency Manager" (beside GPU Turbo), which works like MediaTek's Resource Management Engine inside EMUI 10. I could only ima...

Maybe look up a video on YouTube on how to get rid of Ads. It's simply about turning off recommendations in most cases. Besides, if you are getting nude ads, we all know what you must be surfing since they are based on your activity.