So, is this finally it - Nokia's first Windows Phone 7 handset? Could be - it's allegedly from a presentation for a carrier and shows a device very much like the Sea Ray (it showed up on video too). It's called Nokia 703.

The slide even lists some specs, which are unfortunately unreadable. Well, almost unreadable - you can clearly make out the categories and if you stare at it long enough, you start seeing even the fine print. 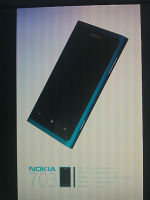 Now, what we're reporting here is a leaked slide with barely readable text so the actual device specs might be quite different - but if they turn out to be accurate, the Finns better have some compellingly low price for the Nokia 703 or it won't get very far.

Under General, the second word seems to start with an N, which would indicate a November launch - that would be in line with an October announcement at Nokia World and a launch the following month.

I think this will be a good phone. The IP4 was a pretty good phone and the specs of this aren't too far off. Plus from what I read, Windows Phone isn't much of a memory hog. The 703 has the iphone 4 right in its cross hairs. It doesn't have retina, b...

that showed that you never tried any of wp7 phone and compare using only the specs. HTC desire and HTC trophy also have similiar specs,but you can see how much the different between the two in term of speed and slickness yes security also i...

If you read carefully, I said "If so". This clearly indicates that I am not assuming it is a high end device. Secondly, I own an HTC Desire, and the two devices looked pretty similar to me spec wise. Thirdly, speed is not the only cruc...