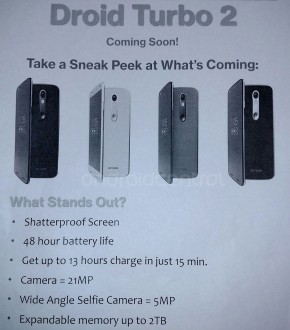 As we're now mere days away from the grand unveiling of Verizon's new Droids, the upcoming Motorola Droid Turbo 2 understandably keeps on leaking every day. And the carrier itself has already unveiled the look of the device's back, through a short teaser video. Yesterday we got a look at the back cover models that will be available through Moto Maker, and today a purported info sheet originating at Big Red has been leaked.

This is apparently meant for Verizon employees to get a quick hang of the Droid Turbo 2's main differentiating features. As you can see, the "shatterproof" screen we've been hearing so much about is confirmed once again.

The Droid Turbo 2 is said to sport 48-hour battery life, as well as fast charging support, with 13 hours of charge being available after just 15 minutes plugged into a power supply.

The camera is a 21 MP unit, probably the exact same one found in the already launched Moto X Style and Moto X Play, undoubtedly Motorola's best effort in the space in recent years. The selfie cam is a wide-angle affair with 5 MP resolution, while microSD card support will provide storage expansion capabilities up to 2TB.

That's it for now, but you should probably expect to see more leaks about the Droid Turbo 2 until October 27, when it will finally become official.

This has a massive battery though, i think i'd still want to get this.

Why not make it available to other carriers Unlocked. Why do some OEMs choose to diminish their sales with exclusive deals which deprives thousands or even millions of potential buyers from other carriers? It is a failed way of selling phones