A press image of the ZTE Grand X Quad has been leaked by the kind folks over at @evleaks today, alongside some specs which shed more light on the company's mid-range offering. 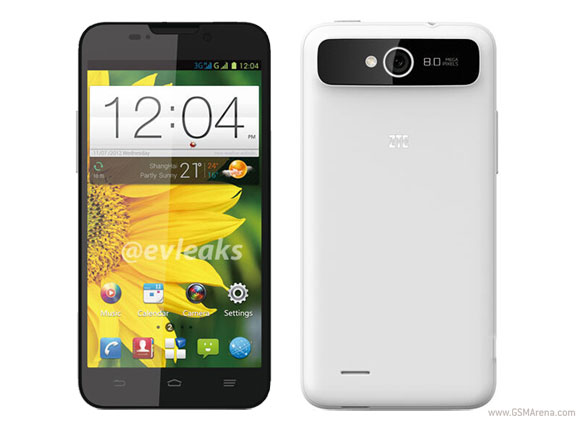 The ZTE Grand X Quad stands right below the company's flagship - the Grand S - and comes with a 5" gapless TFT display of 720p resolution. It's powered by an undisclosed 1.2GHz quad-core processor (likely the MediaTek MT6589), 1GB of RAM. Internal memory remains a mystery, but it's rumored the Grand X Quad will pack a microSD card.

At the back, there's an 8MP camera with LED flash, purportedly capable of shooting 1080p videos. The battery is removable and has a capacity of 2500mAh. Still, according to preliminary specifications, the Grand X Quad weighs 163 grams and measures 141.0 x 70.0 x 8.9 mm.

Information regarding pricing isn't available at this time, but we suspect it should come around the same time the Grand S is bound to hit China - the first quarter of this year.

The Jiayu G4 advanced seems to be ready. And my tablet has 2GB RAM and is quad core - though Allwinner A31 and not MTK6589.

This shows some serious aggression from Android's Chinese OEMs which is good. This particular model just Harlem Shook all over Samsung's ridiculous Galaxies' Grand and S II Plus. This is PRECISELY WHY I've cautioned that Samsung should start to ...