Only two days ago we got a glimpse at the upcoming LeEco Le 2 Pro smartphone, through some leaked images showing it. Back then we found out a couple of its most important specs, and today thanks to a new leak we get a more complete list.

LeEco is the Chinese company formerly known as LeTV, which grabbed the international spotlight when it was the first to release a device powered by Qualcomm's Snapdragon 820. And it looks like it really likes that chipset, since it's going to use it again in the Le 2 Pro. 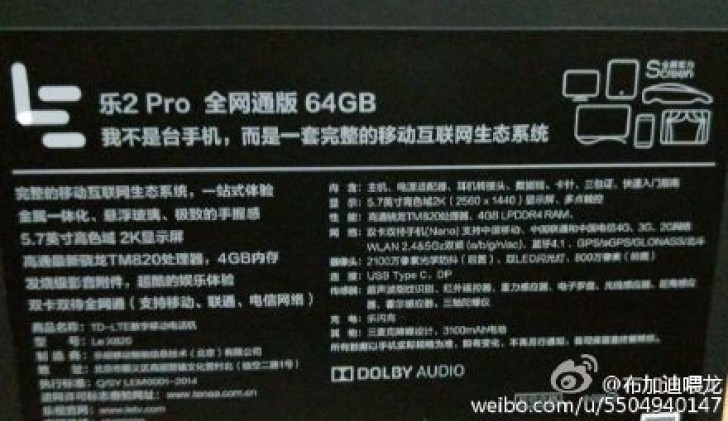 The image you can see above purportedly shows the back label from the box of the Le 2 Pro, which helpfully lists the handset's specs. The Le 2 Pro should thus come with a 5.7-inch QHD touchscreen, a 21 MP rear camera with LED flash, an 8 MP selfie snapper, the aforementioned Snapdragon 820 SoC on board, 4GB of RAM, 64GB of built-in storage, LTE support, a USB Type-C port, Dolby Audio, and a 3,100 mAh battery.

It will obviously run Android, but which exact version isn't clear yet. Nor is how much it will cost, or when it's getting official. Or, for that matter, whether it will ever be sold outside of China. Anyway, its specs certainly make it worthy of the flagship moniker.

In leEco 2 my music app is not working.. it is not showing any song.. how can i fix it??