Lenovo A1000 - user opinions and reviews 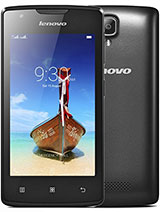 I would not recommend this phone to anyone because I have it.
First of all it has no proximity sensor so you can list options with your ear during conversation.
It has a bad signal...
It has numerous bugs...
I think that price is saying enough...

sissou , 05 Aug 2016plz tell me i want buy this phone and l'm soo Confusedbuy this phone there is a good specification for this rate

Planning to buy this phone for my mother (senior citizen) only for whatsup purpose, so that she can talk to anyone in abroad - please suggest, whether this phone ideal for this

Lenovo A1000 is a overall decent and CHEAP smartphone. You really can't expect from a 70$ smartphone to perform well as a 300$ one.
Pro's-inexpensive,solid battery life,reliable lenovo software and hardware.
Con's-heavy weight,bad speakers and cameras,heats up a lot. Score-55/100

ammupapu, 09 Aug 2016i'm interesting to purchase this mobile and i saw features its good but i have a doubt, is the... moreYes there's a vga front camera

Very poor camera. I doubt it is 5MP! Photos are not clear nor sharp

i'm interesting to purchase this mobile and i saw features its good but i have a doubt, is there front camera ?

I already used this mobile phone and so far so good everything is running well. It's user friendy. I love the screen shot menu...

Fifi, 01 Aug 2016It's very goodplz tell me i want buy this phone and l'm soo Confused

i was gonna buy this phone it is good very very cheap but it is smal and havy and lagy that why i not buy it !

SKI, 31 Jul 2016I want to buy this phone only for calls and occasional text msgs... Is it worth of buying for ... moreIt's very good

I want to buy this phone only for calls and occasional text msgs... Is it worth of buying for this purpose only?

Am thoroughly disappointed. Bought this phone 2 months ago and now the screen has gone black

1. Bought this around 2016 March, in West Bengal
2. Wanted just a basic android phone to use taxi hailing apps not available on my Nokia and BB.
3. After installing few apps ~4 ola, uber, candy crush, it says no memory to install more app. Had to uninstall one to install another. Tried moving apps to SD card whatever possible, enabled developer mode, made SD as default, but still same issue.
4. Left the phone on my power bank for a day (mistakenly), came back, battery was swollen, back cover does not fit now and the battery drains out in 1 hour, rendering the phone unusable.
5. But after update the space issue is resolved (happy) but phone has no battery (sad)
6. Never faced radio issues (2G, 3G, GPS or wifi) though

I speculated that this model would have good batttery life with 2000 mah and a 4-inch screen. I was not dissappointed when I bought it.

Nuck, 19 Jun 2016who the best a1000 or acer liquid z220 in the same range level ?????Hard to Choose, can you find something else in the market that is not the worst of the brand. hahaha..... both phones you mentioned are the worst I've seen.

Lenovo has good battery but most other functions doesn't function well, best for the first day only.

alexs, 18 Jul 2016battery is draining very fast also the phone getting hot always on useIf your phone gets to hot handle when at use. It maybe case of excessive overcharging. Li-Po Batteries are not good when overcharged. They tend to short the phone, thus making your phone hot when at use.

Next that may happen is that the phone dies, and does not turn on anymore. [my opinion and experience only, i'm not an expert on android phones.]

Total of 530 user reviews and opinions for Lenovo A1000.
ADVERTISEMENTS