Lenovo A2010 - user opinions and reviews 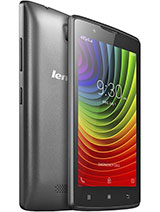 I bought Lenovo 2010 in March, This is worst phone, I ever purchased.
Battery get drain after 40. In less than a second, phoned became dead.
0 Rating for this phone.

hate lenovo, 23 Apr 2016The battery in this phone is worst like if u r travelling long distances, it gets dead so earl... moreI had the same problem with contacts unless I found out the correct options. So when you add a new contact in your phone, choose the "phone contact" at first and after that add your new number. Hope I could help you.

Chitti, 20 Aug 2015Does this phone supports OTG or not ?It will not support otg cable...

I've used this phone for 3 months and I love the strength of its screen. It has fallen hard over 20 times before developing a crack. I hate it's camera though, esp the rear. Has very poor zoom and fake contrast. Performance is excellent

Phone is very nice, mostly for hard users. battery backup is good, even sometime its working till 2 days. no issue and no problem in all functions,

one thing only touch is not good and it is because of budgeted phone.

Why i can't remove app to sd card ,help me please!

hate lenovo, 23 Apr 2016The battery in this phone is worst like if u r travelling long distances, it gets dead so earl... moreEven I am facing same problem with the contacts..... Is there any solution for this problem....

The battery in this phone is worst like if u r travelling long distances, it gets dead so early and then puts u in trouble. Also the main problem is that the contacts get erased very frequently as we switch it off and then on. Overall it is the worst phone to buy

When i turn off this phone and when you press down volume it can be unlicked. Why?

When i turn of my phone lenovo a2010 it can unlocked by the down volume why?

i have buyed this mobile in JAN-2016 and today 4-april mobile not becoming on and not charging . very worst mobile in my life. becoming very hot and battery life is very less

I am using lenovo A2010 I bought this I think less than a month and now I cannot use it. My phone screen is being occupied by color white and when I remove the battery and put it back I turn it on and it's just blinking. I don't know what to do. Please tell me what to do.

Was given to me as a company phone and it is utter garbage.

The screen is unresponsive, the launcher lists all your apps on the home screen (you can install Google Now Launcher but it'll slow to a crawl).

The battery lasts around 8 hours on standby (I don't have fb) and will die within two under heavy usage.

There's also something wrong with the radios, my personal phone (Nexus 5x) will show full bars and the Lenovo barely two. Oh,and it can't connect to 5Ghz wifi.

To add insult to injury, it apparently costs only 60 bucks less than the Nexus.

Total of 730 user reviews and opinions for Lenovo A2010.
ADVERTISEMENTS