The Lenovo K3 Note comes in an understated retail box, with nothing but the bare necessities inside. There's a powerful 5.2V/2A AC adapter and a USB cable, but headphones are missing. There are however, bundles, which include a headset for a small increase in price.

The Lenovo K3 Note measures 152.6 x 76.2 x 8.0mm and its dimensions are nearly identical to those of the Meizu m2 note and the Xiaomi Redmi 2. Weighing in at 150g, the Lenovo phablet is a gram heavier than the m2 note, but 10g lighter than the Redmi 2, and the Xiaomi model does feel tangibly heavier.

A plastic-built smartphone with a removable back cover is something hard to find in the upper market segment (the LG G4 would beg to differ), but around the $150 price point of the Lenovo K3 Note it's the norm.

It's quite well put together and feels sturdy, though there's the occasional creek coming out of it, should you test its twisting stiffness. It's also somewhat light for its dimensions and gives out a minor hollow vibe. 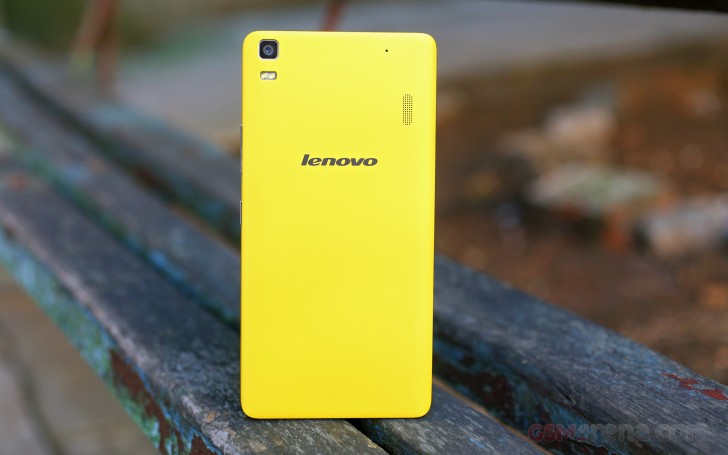 The bright yellow paint job is certainly a head-turner, but you can also opt for the more inconspicuous white one, or the entirely unremarkable black version. We'd stick with Laser Yellow, as it gives character to an otherwise run-of-the-mill device.

The cover itself is easy to remove, without being prone to falling off on its own. Also, spare covers are available online for less than $5, and, being a hugely popular model, the K3 Note enjoys a wide variety of aftermarket accessory cases and backs, so you can spice things up to your heart's content.

There's plenty of stuff on the back, most notably the camera module in the top left corner. The lens is slightly recessed inside the cutout in the cover, so it should be pretty safe. Lenovo hasn't unnecessarily enlarged the front element of the lens as it's all too common, and the camera only takes up as much space as required.

Right below the camera is the dual-LED flash. On the right is the pinhole for the secondary mic joined by the loudspeaker, which is in a somewhat unusual position.

Pop open the cover and you see the battery, which is spread onto a large area, but is very thin. The two SIM slots take micro-SIM cards and one is limited to 2G, while the other gets the full connectivity suite. There's also a dedicated microSD slot, which is getting rare in these days of hybrid second SIM/microSD solutions.

The front is where it gets "noname" pretty quickly. Looking at the smartphone head on (the generally accepted manner, when using it) you'd be hard pressed to tell what make it is. The Redmi Note 2, for one, looks nigh identical, though Xiaomi did give its capacitive buttons a distinct red color.

The K3 Note still uses the old concept with a context menu button next to the home and back buttons below the display. Above it are the earpiece, front-facing camera and proximity/ambient light sensors.

On the right side of the K3 Note you'll find the volume rocker and the power button. They have a nice metallic effect with concentric circles spreading out from the middle. The buttons are attached to the cover, and engage tinier keys inside.

The left side is entirely bare - remember, all slots are under the back cover.

Buttons on the right, nothing on the left

Lenovo has this perplexing practice to place the microUSB port on the top of its budget smartphones, and the K3 Note is one of those. With the battery contacts in the top half of the device, it makes sense to keep the wiring shorter, but it's just plain unnatural. The 3.5mm headphone jack is here too.

With the microUSB port up top, the bottom is only home to the primary mic.

MicroUSB port and 3.5mm jack on top, mic on the bottom

In hand the Lenovo K3 Note feels lighter than you'd think, and the back has just enough texture for a secure grip. The buttons are where you'd expect them to be, within easy reach of your right thumb. Lefties will find them equally well positioned for index finger operation.

Lenovo K3 Note in the hand