A standalone VR headset developed jointly by Lenovo and Google was announced back in June 2017. The product made its way to CES 2018, and now it’s official - meet the Lenovo Mirage Solo. The Chinese manufacturer also introduced the Lenovo Mirage VR streaming camera with two 180-degree lenses for immersive 3D. 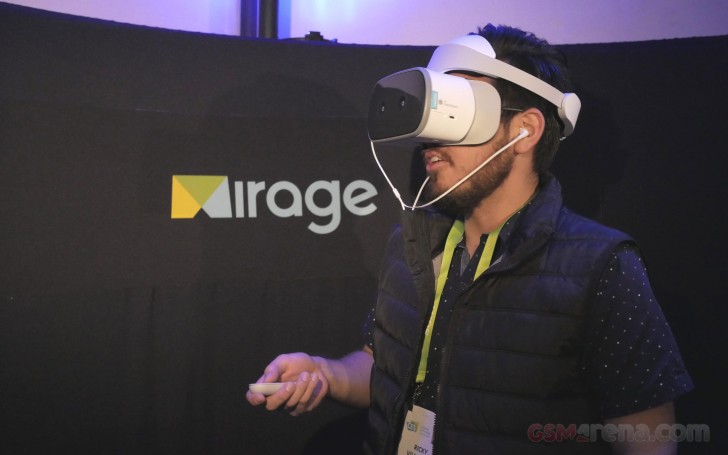 The Mirage Solo headset is based on the Daydream by Google, unsurprisingly. It lets you walk around virtual space using inside-out WorldSense tracking. During our demo, it felt wonky, but we attribute this behavior to the large amounts of interferences around.

This headset looks like a lovechild of the Samsung Gear VR, looking at the base, and the Sony PlayStation VR because of the headband shape. It is adjustable in a few ways, but is heavy on the nose with its 645 grams and not that comfortable at all. There is also a controller, similar to the Daydream one.

The Lenovo Mirage VR Camera is something new on the market. Instead of shooting in 360 degrees, it takes a 180-degree video of what's in front of you. Lenovo says recording whatever is happening behind you is wasteful, so you can just enjoy the view in front.

Instead, the dual 13 MP cameras record stereoscopic 3D video, so you also get depth.

Lenovo Mirage Camera from all sides

The camera itself is extremely portable; you can put it in your pocket. Lenovo promises native integration with Google Photos and YouTube, so you can just point and start shooting videos in 4K resolution. Some might say the device is looking minimalistic, while others will find it too bland.

It is good to see another player enter the VR market. We’ll see how Lenovo’s VR products will perform in the second quarter of 2018 when an official launch is scheduled. The Mirage Solo is expected to cost under $400, and the Mirage Camera will be priced under $300.

So far, I haven't seen any good Lenovo product. In my country Lenovo = Don't buy

Glad to see someome smart around here. Meanwhile, Lenovo cant even workout weight distribution of their headset with simple engineering. "heavy on the nose with its 645 grams and not that comfortable at all." Words has been spoken. Time to remodel it...

Theoretically an F1 car can drive as well upside down as upside up... In fact, the amount of downforce the current generation F1 cars generate is so excessive that track owners are actually complaining that it damages the tracks. :) Anyhoo... a 360...