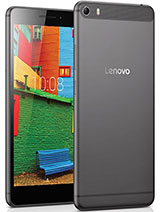 Jeff, 03 Mar 2016Well it does have dual-SIM functionality. Just remove the memory card and put the second sim i... moreCorrection it does not share nano sim with microsd. If both share please tell me how

Definitely a fail product from Lenovo... bought a weeks ago and I found several severe bugs that make me think it's a half done product.
Unresponsive touch panel in some upper area (fix it with Touchscreen Booster app, it seems working well),
Cannot read 64gb microsd (if it can I assure you that several files will missing, use max 32gb instead),
Laggy launcher & system software (how come mi4i which has almost the same hardware specs can performs much better much smoother ??)
WhatsApp notification or any other messenger seems delayed / not shown (sometimes) until you unlock your Phab Plus (this is really funny...)
Stuck in Android 5.02 which is really really buggy (could be forever...) since this Phab couldn't meet targeted sales so badly in China. Just hoping for update to fix those bugs (which I rely on Lenovo...OMG)
It also has camera shift issue, sim 2 problem (sometimes), slow charging, average quality camera, unreliable lens focusing on taking videos, microsd issue (you should format microsd inside the phone), PC connection issue, etc.
Build quality is decent from outside, although I doubt they use good quality component inside. Other Chinese smartphone company like Xiaomi, Huawei, Oppo, etc. has already proved that most of their products has good quality component inside.

I was using this phablet from last 3 months, and didn't feel problem.
But last weekend it fall from my hand and screen got broken. I checked with lenovo store for the replacement of the broken screen but still they don't have spare parts of this phone.
If someone know from where can i get new screen please reply.

Anonymous, 01 Mar 2016After a week living together with Lenovo phab plus I have to say that return to something less... moreWell said...

Anonymous, 01 Mar 2016After a week living together with Lenovo phab plus I have to say that return to something less... moreWell it does have dual-SIM functionality. Just remove the memory card and put the second sim in that slot. This phone has a shared 2nd SIM and memory card slot.
But still I would say that there's ain't no need to buy a phablet this big unless you are a old grandpa with really bad eyesight.

syed ali, 01 Mar 2016I am using and its awesome.waiting for cover and screen protector?you get the cover in ebay and amazon. dont go for a tempered glass because the screen is big the glass falls off most of the times. but you are welcome to use a screen guard. this is if you have not ordered it yet...

After a week living together with Lenovo phab plus I have to say that return to something less than 6.8 inches is impossible.

Is little bigger than 6's but what it offers less eye fatigue and that is is incredible. It is super small for a tablet and not too large to use as a main phone.

The processing power of the processor is very good for an average user although the is at midrange. After four successive upgrades of firmware the camera corrected and now shoots perfect pictures. The almost stock Android environment plays very smoothly and without stuttering.

The available memory of 2 Gbyte is between 0.9 to 1.1 gigabytes.

In 4G network plays very well and can easily be switched from one card to another and of course it turns the other sim card to 2G.

Battery although it is only 3.500 milliamperes it has incredible autonomy Despite the huge screen.

However, it gives me much more autonomy of my samsung note4 and the my Asus zenfone 2.

Now compared p8 max ( that I lived with for 2 weeks and turn it back cause the battery was not charging ) Lenovo Phab Plus has half price and offers almost the same but the most important of all is that it supports the band 20 at 800 MHz, something that p8 max does not support and it is very important for 4G coverage in europe.

Wrapping up I will say that the only thing I am missing is the dual SIM Full active feature that my Asus Zen fone 2 and P8 Max have.

I wish Lenovo at near feature to bring us one Ph ablet in Hi-End category that features a a huge screen of 6.8 inches.

I am using and its awesome.waiting for cover and screen protector?

For me this mid range Lenovo Phab Plus phone tablet is a one of the best.Don't asking for higher specs like IPhone 6S or Samsung Galaxy S6 Edge.

Lenovo phab, 19 Feb 2016yestday i post saying Amazon is selling this product at 14,999 Lenovo store are selling at 17... moreI was that one too. Amazon.in for sometime were actually selling the phab for a low price...

I received mine yesterday and while using it, it suddenly died. Battery was full. Could not turn it on. Tried switching it on today morning, after pressing the power button for about 2 minutes, it came to life. So far no problem after that

Bought the lenovo phab plus today suddenly the phone just die. Any solution.

Bought the lenovo phab plus today suddenly the phone just die. Any solution.

I cant use both slot for simcards as whenever i inserted both sim, one of the sim will lost the signal. What happens actually

Total of 682 user reviews and opinions for Lenovo Phab Plus.
ADVERTISEMENTS