Following the launch of its trio of tablets yesterday, Lenovo has now unveiled two smartphones - the Vibe Shot and A7000. The Lenovo Vibe Shot aims to blend a great camera experience within a smartphone frame, while the A7000 is a mid-range offering with Dolby Atmos technology inside.

The Lenovo Vibe Shot features a refreshing design and the back of the phone is reminiscent of a point-and-shoot camera. It's built around a 5" 1080p display and Lenovo has equipped it with Gorilla Glass for protection on both front and back. 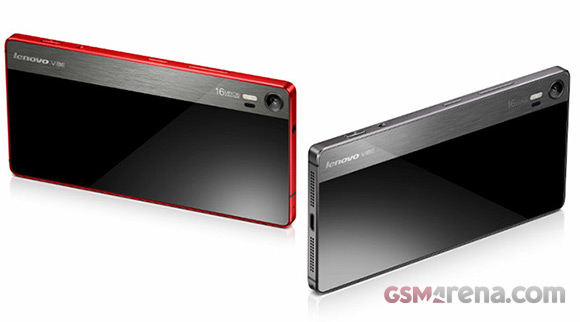 The back holds a 16MP camera with a six-piece modular lens and a tri-color LED flash. The sensor features low-light back illumination and optical image stabilization, too. In order to focus faster, the camera boasts infrared focus feature. The Vibe Shot features a physical shutter button on the right side, as well.

Powering the Vibe Shot is a Snapdragon 615 chipset with a 64-bit quad-core CPU and 3GB of RAM. Additionally, there's 32GB of storage, further expanded by the microSD card slot that's on board. The battery is non-removable 2,900mAh Li-Po.

Expect the phone to launch in grey, white and red with a price tag of $349 in June.

Next up is Lenovo's latest mid-range offering. The Lenovo A7000 comes with a twist - it's the first smartphone to sport the Dolby ATMOS surround sound feature. It works with headphones plugged in and emphasizes sounds of people, places and things better, according to Lenovo. "Voices and noises have broader range from high to lows", as per the company, but we're yet to experience this for ourselves.

Additionally, the phone packs a 5.5" IPS HD display and a MediaTek chipset with a 1.5GHz octa-core processor plus 2GB of RAM. Storage is 8GB backed by a microSD card slot. The phone is dual-SIM ready and offers LTE connectivity.

I am hearing about lenovo vibe shot for a long time but stll not sure when it comes in india.