Lenovo Vibe X3 has some specs confirmed by another benchmark

The Lenovo Vibe X3 still isn't official, and it just keeps on leaking. Last week we even saw a purported leaked render showcasing it, and earlier this month it got certified for sale in China by TENAA.

The Vibe X3 was already spotted in the database of GFXBench, and now someone with a prototype has used another benchmarking app for Android. This time around it's Geekbench, and through its device information listing it helpfully confirms certain major specs. 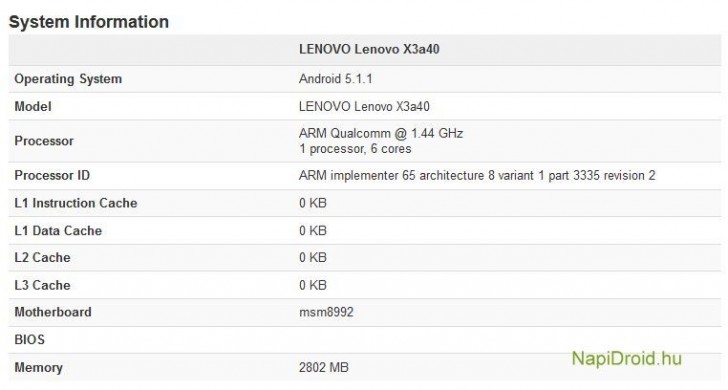 The handset will feature 3GB of RAM, and prototypes currently run Android 5.1.1 Lollipop. This is probably going to be the OS version the Vibe X3 will launch with, whenever that eventually happens.

Hopefully Lenovo plans on unveiling the Vibe X3 soon, since we first heard about it back in February. It's also expected to have a 5-inch 1080p touchscreen, a 21 MP rear camera, and an 8 MP selfie snapper in tow.

most sites are suggesting a price of around $200 for this which is delusional, even if china i'd love to be wrong though

haha, I said sorry because it was me who ran that bench on my phone