Phones can talk to you and even talk back to you. Every now and then, they might even say something funny. Your phone knows where you are and what you're doing. Your phone is always watching. Now, look at your phone. It'll look back.

Meet the LG AKA. A funny phone with a personality. Big anime eyes smiling, squinting, blinking right at you. Different expressions depending on what time it is, on your actions or on what's incoming. Who thought the glance screen would be taken so literally?

The LG AKA wasn't the phone to remember at the last CES, but sure was hard to forget. A cute phone - never thought we'd ever say that about a five-incher - most likely for kids and teens, or the fans of phone charms and bunny-eared cases. And mascots. 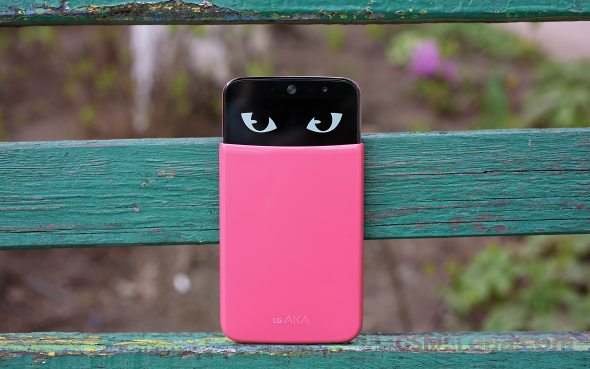 There are four of them in the AKA lineup, a name and a color for each character. Eggy is yellow, Wooky is white, YoYo is pink and Soul is Blue.

The phone itself has midrange specs at bests with some features borrowed from the LG G series. The AKA runs Android 4.4 KitKat on a Snapdragon 400 chipset and packs a 5" 720p screen. There's an 8MP camera, 16GB of inbuilt storage with a microSD card slot, LTE connectivity and a 2,610mAh battery. The camera has laser-assisted auto-focus and the volume rocker and power button are placed at the back.

The Snapdragon 400 is soon to be retired but that didn't seem to bother LG. The chipset is still capable of handling the essentials, including an LTE radio, so the lack of 64-bit support can be forgiven. After all, if one's buying an AKA we bet they're are not getting it for the performance and specs.

The LG AKA comes in different colors and personality - which is to say the interface changes to match the case. Not an entirely new concept but certainly taken a couple of steps further. We got to review YoYo, the pink and chubby one. It's our reviewer vs. LG AKA right after the break - let's see who blinks first.

this phone is everywhere in south korea just go over and get, its got super and attractive ui ):

Hi there, Were can i get this phone ? I dont find its availibity online niether at LG stores...