Gallery is full of eye-candy

The Pictures hub is the photo gallery of Windows Phone 7. When you start it, it shows the most recent photos (including those from the camera), What’s new (which shows photos from online services) and a menu, which lets you view all photos, photos sorted by date and your favorite photos.

Viewing an individual photo supports pinch zooming and you can easily upload the photo to Facebook or share it on some other service. There’s an option to automatically strip geo-tagging information before uploading it to online services – that way your offline album will still be geo-tagged, but you won’t have to worry about privacy.

The Pictures hub will automatically pull photos from your SkyDrive, Windows Live and Facebook accounts.

The video player doesn’t recognize .AVI files – in other words, don’t expect DivX or XviD support. However, the Zune software on your computer will automatically convert such files to .MP4 – so, you can watch those formats on the E900 Optimus 7, it’s just that the transfer to the device can take quite a while (depending on your computer configuration).

The LG E900 Optimus 7 also has a built in FM radio with a dead simple interface. You have the current frequency in very large digits – swiping left and right changes the frequency and a swipe and release automatically searches for the next available station in that direction.

When you use the LG E900 Optimus 7 with an active external amplifier (such as your home or car's stereo) it provides really clean audio output. It got excellent scores in our test, save for the intermodulation distortion, which is only average. In those scenarios the Optimus 7 will easily rival any competitor.

However when you plug in a pair of headphones the stereo crosstalk skyrockets so high that it almost sounds like a mono device. The rest of the readings are unaffected by the increased resistance and the handset remains decently loud but the flaw is still big enough to ruin the overall score. 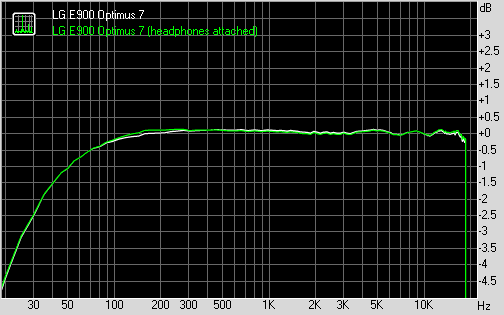