LG's answer to the 1080p screen touting HTC DROID DNA has leaked thanks to GLBenchmark's website. Codenamed the LG F240, the device is reported to sport a similarly spec'd display with a 1920 x 1080 pixels resolution. 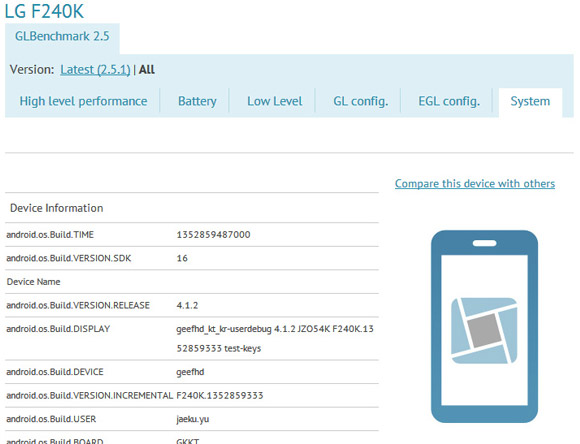 According to its benchmark results, the LG F240 utilizes the muscle of an 1.5GHz quad-core Snapdragon S4 Pro processor coupled with an Adreno 320 GPU. The same raw power is found in the HTC DROID DNA, too.

Display size, RAM and internal memory have just been detailed, but the F240 has gone through the benchmarking process running Android 4.1.2 Jelly Bean.

Details are scarce at the moment, but there's a pretty high chance to witness the unveil of the device either at CES 2013 or at MWC 2013 in Barcelona. Speaking of CES 2013, Samsung is also being rumored to be working on a droid with a full HD display in time for the Consumer's Electronic Show early next year.

HTC's UI is much better than any of the phone and the built quality is also good.But to be competitive in the current market that's not enough. Most of the new phones that HTC is planning doesn't have expandable memory card slot, less ram compare to ...

I wouldn't count on it just yet. I think Apple realised now that the competition is stepping up, not just Samsung but everyone else in the industry. If they don't step up their game they will become history. And I don't think Apple is the type to con...