It's been a well documented and, some might say, overly-teased affair but it has come to an end. The LG G2 flagship is upon us here in New York city and it brings a ton of innovation in one of the most compact over-5" bodies out there on the market.

The LG G2 comes with an almost bezel-less 5.2" FullHD display in a body not much bigger than the one on the Galaxy S4. It gets even more interesting when we get to the camera. It's a 13 MP unit and it offers optical image stabilization in order to minimize blur and allow higher shooting speeds under unfavorable light. 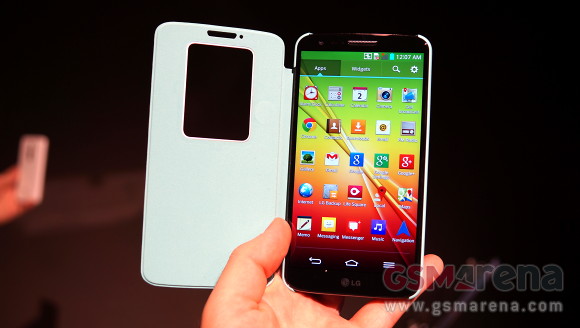 The LG G2 comes to tackle the competition, especially devices like the Samsung Galaxy S4 and HTC One with a larger screen, more potent chipset, superior camera (on paper), bigger battery, etc.

Take a look at what the LG G2 has to offer.

LG G2 at a glance

LG purposefully teased the LG G2 relentlessly over the past couple of weeks and it managed to build up the hype, leading to today's event but this move also obliterated any mystery that could have surrounded the just announced flagship.

It's clear that LG will be going for the crown with the LG G2. It waited enough so it can release it as an unmatched contender in regards to its size to power ratio and seems to have put a lot of effort into differentiating it. There are a lot of software tweaks to explore and we're very eager to check the camera on board the G2.

Is there any problem with lg g2 n Lollipop is officially announced in India ?? Plz rply itz ergent

Whixh is better LS980 orVS980 Please give me good information about this.