With the new season well under way, the LG G2 mini is trying to have the last word in the compact class just like the original did last year at the high end. With the same design as the flagship (slim bezel, rear buttons and such) and the biggest screen among the minis, LG's compact smartphone is putting its best foot forward.

But then, just like the flagship, the LG G2 mini is going after a certain competitor and not exactly keeping it a secret. The screen resolution, the chipset, the imaging skill are the same as the Galaxy S4 mini's. In other words, if anyone was hoping for something along the lines of the Sony Xperia Z1 Compact, they'll be disappointed. 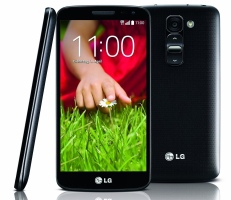 No, the G2 mini isn't a compact powerhouse. It's a well-rounded package still, and one that even does a couple of things better than the flagship, in hope to find a place in the crowded place where minis have to deal with ex-flagships and aggressively priced mid-rangers.

The qHD resolution is only just enough for the 4.7" diagonal, especially considering the competition will offer 720p screens in the same price range. The Snapdragon 400 chipset places the G2 mini squarely in the Android midrange - in fact, the quad-core variety (four Cortex-A7's at 1.2GHz) is not necessarily better than the dual Krait setup in the Galaxy S4 mini.

What's definitely a step in the right direction is the removable battery and the added microSD card slot - the phone could've been slimmer perhaps without them but we'd have the added flexibility any day over a couple of millimeters less around the waistline. The latest Android 4.4.2 KitKat and the matching edition of the Optimus skin are another point in favor, offering some features that are only available on the premium G2 and G Pro 2.

The LG G2 mini is quite compact for the screen size as well - and handling quite comfortably - the rear-mounted keys contributing handsomely.

The LG G2 mini hanging around in our office

Follow us for a tour of the exterior to find out more about how the LG G2 mini feels and handles. The usual stops include the display and battery performance.

I should say that the LG G2 mini was far ahead of its time in terms of display size and battery. Right now, a 5 - 5,2" display is considered "small"! And many actual phones has lesser batteries (absurd even if the new chipsets are less power consumer...

hi it is LG G2 mini compatible for OTG?