The gallery on the LG G2 mini is quite similar to what you get on most Android devices, including a resizable list of thumbnails. There's support for full-res images which results in a pleasant viewing experience thanks to the ample and sharp screen.

Rather than having an in-house editing suite like Samsung droids, for instance, the LG G2 mini relies on Google Photos to handle image editing. It features a variety of neat filter effects and the standard options like crop, rotate, and color balance, but doesn't let you write or stamp on an image.

The music player is jam-packed with features and supports a wide variety of file formats, including .FLAC, and .WAV among others.

Music is sorted by the usual Artist, Album, Playlist filters but there's also Folder support that's quite handy as it saves you the need to sort songs into playlists like on so many other players. It can also search for content on other devices like PCs on the same network via its DLNA functionality.

LG has enabled equalizer presets (including a custom one with 7 bands) and even has the ability to adjust the pitch and speed of a given track during playback.

Music player controls in the notification area and lockscreen

The video player on the LG G2 mini opens into thumbnail view by default, which on some of Samsung's premium models would be animated but on the G2 mini are static.

Besides being able to choose between three crop modes for how the video fits the screen, you can also adjust the playback speed anywhere between 0.5-1.5x.

The LG G2 mini offered a list of subtitles and let us pick. It scans all available subtitle files, so the file doesn't even have to have the same name as the video file as before.

Video playback is great, especially considering it's capable of playing almost any file trouble-free - including the more obscure DivX and AC3 codecs. .MOV files were the only video format that the G2 mini refused to open.

The LG G2 mini performed excellently in the first part of our traditional audio quality test, posting great scores all over the field. Its volume levels were hardly spectacular but they should suffice for the majority of users.

There's some degradation when you plug in a pair of headphones, but it is barely noticeable outside of dedicated audio labs. The stereo crosstalk rises a tiny bit, but that's about it - the rest of the readings remain unchanged. 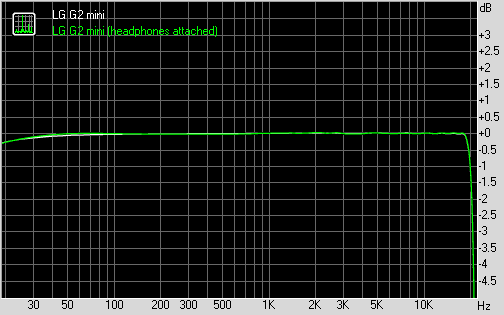